When I was first elected in December, I never expected that I would be spending so much time talking about a 300% rise in hate crime against Chinese and East Asian people linked to a global pandemic. I’m proud of my roots – my mixed heritage is both Asian and British. I know that racism against people like me didn’t start with coronavirus, as an undercurrent of anti-Asian racism has plagued this country well before Covid. But now the lid has been lifted, and the far-right have wrongly been given legitimacy to air their derision, violence and hatred against us.

From an early age, it was made clear I was seen as different. In a school play set in a Chinese courtroom, the person doing our makeup pointed at me and said, “make the other kids look like her”. It wasn’t until my teens that I felt my safety was threatened because of my mixed heritage after a student bought a knife into school to try to stab me because she didn’t like it when races mixed.

Today, we have police chiefs warning that the far-right is using Covid-19 as an excuse to attack what the Metropolitan Police describe as “oriental” people (in itself, a term better suited to 1920 than 2020). So I understand the fear and frustration that many British East and South East Asians are feeling, as racists add another powerful tool to their arsenal – coronavirus.

Donald Trump calls coronavirus the “China plague” on TV and at his rallies. We’ve seen Tory ministers share Covid jokes with caricatures of a person in a Chinese pointy hat and slanty eyes. A Tory council leader told a Zoom meeting that this was all caused by “someone eating under-cooked bat soup in China”. I’ve even overheard MPs in the tea room refer to those “evil bastards” and “oh, you know how they look”. They were rightly discussing awful human rights abuses being carried out by the Chinese state, but this othering of an entire ethnicity, due to the actions of a government thousands of miles away, should have no place in society.

Politicians should lead by example. We should absolutely criticise the Chinese state for their appalling abuses against the Uyghur people and actions in Hong Kong. If I’m able to confidently do that without falling into tropes that fuel racism or make British Chinese and East Asians even more vulnerable or fair game for racists, then I think we all can.

Figures obtained by the End the Virus of Racism project showed that there were 261 hate crimes against Asians in April, 323 in May and 395 in June – rising as lockdown eased. These do not include the numbers of hate crimes that have gone unreported. The charity Protection Approaches reports that this July saw the highest ever numbers of recorded hate crime against protected groups – 40% higher than after the 7/7 terror attacks.

In March, Jonathan Mok, a 23-year-old student from Singapore, was punched and kicked in the face on Oxford Street by a group of men who told him: “I don’t want your coronavirus in my country.” British Chinese filmmaker Lucy Sheen was on her way to rehearsals when a white male passenger whispered in her ear on a bus: “Why don’t you f*** off back to China and take your filth with you?”. In Hitchin, just down the road from my Luton constituency, a takeaway owner was spat at and repeatedly asked whether he had coronavirus. In Luton, people have been shouted at from cars. One woman wrote to me saying that she no longer feels safe, and walks around with her mask on and her hood up to cover her face.

This is all without looking at the cesspit of social media. During the pandemic, blatant racism and conspiracy theories have been allowed to spread – and social media apps have acted as a signal booster for far-right racists. I report racist videos I am sent of people eating live animals or claiming that I am part of some global Chinese government spy network, but social media companies like Twitter, WhatsApp and Facebook should be held responsible for what is published on their sites.

We need an end to politicians telling us just how grateful they are for our contributions – for our culture and our skills, our healthcare workers, our businesses. Politicians need to act. Let’s act to end the virus of racism for good. 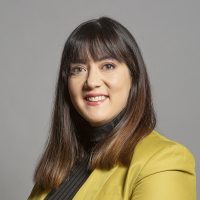