John McDonnell has declared as “profoundly wrong” the suspension of Jeremy Corbyn over his response to the Equality and Human Rights Commission report on antisemitism within the Labour Party.

Taking to social media shortly after Labour announced that the former leader had been suspended pending an investigation, McDonnell urged members to call on the leadership to reverse the disciplinary action.

He said: “On the day we should all be moving forward and taking all steps to fight antisemitism, the suspension of Jeremy Corbyn is profoundly wrong. In interests of party unity let’s find a way of undoing and resolving this.”

The former Shadow Chancellor added: “I urge all party members to stay calm as that is the best way to support Jeremy and each other. Let’s all call upon the leadership to lift this suspension.”

Following his suspension, Corbyn declared that he would “strongly contest the political intervention” to suspend him and argued he has “made absolutely clear those who deny there has been an antisemitism problem in the Labour Party are wrong”.

The comments by McDonnell this afternoon follow those of deputy Labour leader Angela Rayner, who said Corbyn has an “absolute blindspot” when it comes to the issues raised by the EHRC investigation.

She told the BBC’s World at One earlier today: “Jeremy is a thoroughly decent man. But as Margaret Hodge said in her piece he has an absolute blind spot and a denial when it comes to some of these issues.”

Lisa Nandy has echoed Rayner’s comments. Asked whether Corbyn is antisemitic, she said: “I don’t know is the honest answer. I’ve known Jeremy Corbyn a long time and I would have said to you, before he became leader, absolutely not.”

The Shadow Foreign Secretary added: “I genuinely don’t know what is in his heart. What I do is that there was a real blindspot when it came to antisemitism collectively at that level of the Labour Party under his leadership.”

The EHRC report found Labour responsible for three breaches of the Equality Act relating to political interference in antisemitism complaints; failure to provide adequate training to those handling them; and harassment.

Corbyn issued a statement in response to the findings of the investigation, arguing that the “the scale of the [antisemitism] problem was also dramatically overstated for political reasons by our opponents inside and outside the party”.

Labour leader Keir Starmer told a press conference today: “I found this report hard to read. And it is a day of shame for the Labour Party. We have failed Jewish people. Our members. Our supporters. And the British public.

Starmer also said: “If you’re antisemitic, you should be nowhere near this party. And we’ll make sure you’re not.

“And if after all the pain, all the grief, and all the evidence in this report, there are still those who think there’s no problem with antisemitism in the Labour Party. That it’s all exaggerated, or a factional attack.

“Then, frankly, you are part of the problem too. And you should be nowhere near the Labour Party either.”

Labour has been served with an unlawful act notice following the investigation. The party has six weeks to produce an action plan in response to the findings and recommendations of the report.

The party has until December 10th to deliver an action plan to the EHRC on how it will implement the recommendations and when. This is legally enforceable by the court if not fulfilled.

Update, 3:30pm: The Socialist Campaign Group of MPs has tweeted that they “firmly oppose the decision to suspend Jeremy Corbyn” and have pledged to “work tirelessly for his reinstatement”.

He added that the suspension was a “massive attack on the left by the new leadership” and that it should be “immediately lifted in the interests of party unity”.

Update, 4:15pm: Gabriel Pogrund has since reported that not all of the Socialist Campaign Group MPs were consulted on the tweet, with one member saying it was “ill-advised to issue the statement” and they were “waiting to find out on what grounds” he was suspended.

Update, 4:20pm: Several trade union figures have also expressed their opposition to Corbyn’s suspension. CWU general secretary Dave Ward tweeted that it “flies in the face of the report” and the leadership needed to reverse the decision.

Unite assistant general secretary Howard Beckett highlighted a section of the report that said party members could express opinions on the scale of antisemitism and asked Starmer to “explain why you take a different view than the EHRC?” 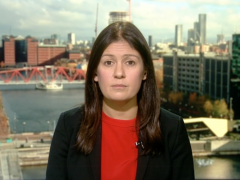