I have not known a time where devolution did not exist. For the past 21 years, devolution has been an ongoing process that is still yet to be taken seriously by Westminster and understood by the UK Labour Party. We still see decisions that affect Wales being taken at a UK level despite the structures and calls for autonomy by Welsh Labour.

Take for instance this election I am standing in, where it was not until after nominations that we found out the role of Welsh representative also means being chair of Welsh Young Labour. These decisions should have been taken by Welsh Young Labour members and not added as an afterthought from UK Labour. We need to ensure that we now have a strong voice that stands up to and works with UK Young Labour to let Wales be heard.

Over the past few months, we have really seen the importance of having a Labour government in office. Here in Wales, the difference in the way we have dealt with coronavirus has been crucial in saving lives and preventing its spread. Now, with the 2021 Senedd elections rapidly approaching, we have the opportunity to transform the trust people have placed in Welsh Labour into support at the ballot box. And Welsh Young Labour has a crucial part to play in achieving this. Last year, Welsh Labour took the huge decision to extend the franchise to 16- and 17-year-olds, entrusting them with a seat at the table while we face the imminent challenge of climate breakdown and now coronavirus. It is something I am immensely proud of my party for doing, but in truth it is only a job half done.

As it stands, Welsh Young Labour is in need of reviving, as we currently operate without the necessary resources or infrastructure to be the truly transformative campaigning machine it has the potential to be. Year after year, committee after committee, decisions concerning the movement in Wales are made by figures in London unaccountable to us in Wales. This is why I am standing on three priority areas: to rebuild our campaigning ability, streamline our communications and build a community for all Welsh young members.

With Senedd elections just around the corner in 2021, we need someone to hit the ground running so our young members can truly be an effective campaign force across the whole of Wales. By sticking to these priority areas, we will be able to see Young Labour groups grow across the whole of Wales. Our party has tools to help contact new members and provide training, which would help improve membership engagement but also deliver vital safeguarding awareness to make sure our party puts the voices of young members from marginalised communities front and centre.

Throughout my membership, I have spent time knocking doors and organising campaigns from Conwy to Cardiff. I truly know what it means to be on the ground in an election. But I also know how it can be a daunting prospect for first-time campaigners. Too often during election campaigns our voices are frequently overlooked, our expertise is neglected and our ability to organise in our communities is diminished. If we are to win over a new generation of young voters and create more Labour activists, the London-centric approach cannot be allowed to drown out the voice of Wales.

As the Welsh representative on the UK Young Labour national committee, it is important that the party guarantees resources and support that can be used in Wales. I can see what our movement is capable of here in Wales, but we need the structure and the support. We need someone prepared to work closely with Welsh Labour so we can re-elect a Welsh Labour government and prepare for a UK Labour one too. I am ready to get started and stand up for Wales. If you would like to know more you can read my manifesto here, or find me on Facebook and Twitter. Diolch yn fawr! 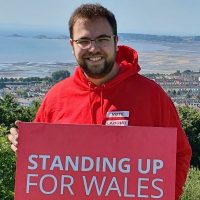 View all articles by Jack Dunne