Recently, a number of celebrity chefs and restauranteurs, including Jamie Oliver and Hugh Fearnley-Whittingstall, signed a letter calling on Boris Johnson to bar substandard food entering the UK under post-Brexit trade deals. Public food figures are up in arms over the government’s agriculture bill, which contains clauses that will allow American food giants to trade freely in the UK, on the grounds that it will damage environmental, animal welfare and food safety standards.

The bill and its contentious clauses are back in the Commons today, and while it looks like the government concedes that it has to protect UK food standards, as the biggest union in food and agriculture in the country, we remain to be convinced that it will make the necessary moves and nail them down in law. We’ll certainly be vocal and active if this is another case of PR over substance from this government.

But while those celebs who have been commendably and legitimately sounding the alarm over US exports of chlorinated chicken and ringing the bell for British business, no mention has been made of the misery of American meat processing workers – misery that could soon spread to our own country. As you are reading these words, workers in US chicken factories will be wearing adult nappies because they are not allowed to go to toilet on shift. No government can allow the possibility of that happening in the UK too.

“What would be shocking in most workplaces happens far too often in poultry plants: Workers relieving themselves while standing at their workstation,” an Oxfam report on abuses in the US chicken processing sector published in October said. “They urinate and defecate while standing on the line; they wear diapers to work; they restrict intake of liquids and fluids to dangerous degrees; they endure pain and discomfort while they worry about their health and job security.”

Pushback on the assertion that UK food workers could be at risk of such conditions will be swift and unequivocal from those supporting the agriculture bill. But if amendments from the House of Lords are rejected by MPs this afternoon, imported food brought in under new trade deals will not have to meet UK standards. In an attempt to secure a US trade deal, the government is willing to let British food firms compete against cheap produce from overseas companies playing by a different set of rules.

Unite is painfully aware of the impact this will have on meat processing staff already dealing with rock-bottom employment conditions. Unite has good industrial relations with many food employers, including ones within the meat industry, who have signed collective agreements that ensure staff are paid and treated decently. But those who believe that the UK’s meat processing sector, which the Gangmasters & Labour Abuse Authority has deemed high risk for exploitation and modern slavery, is radically different from the US’s are either misinformed or deluding themselves.

The proliferation of coronavirus outbreaks at UK food factories should be enough to dispel any notion that the British meat sector is not one step away from a working model that propagates extreme exploitation. There are, of course, good employers, and Unite has been successful in improving health and safety and financial security for meat processing workers historically and during the pandemic. But the explosion of outbreaks in slaughterhouses and meat processing plants in Britain and other nations has exposed the dark underbelly of an industry that, by its very nature, people prefer to avert their eyes from.

No matter where, the outbreaks invariably involve exploited migrant workers living in overcrowded housing, who are crammed into cars and minibuses to get to work, where are required to stand shoulder-to-shoulder all day long for pitiable returns. When coupled with cold, damp and metallic meat processing environments shown to aid the virus’ spread, these conditions create a perfect storm for transmission to occur.

There are UK meat processors who would much prefer to avoid conversations about how their hand-to-mouth employment practices directly contribute to the social deprivation that the virus thrives on. They inhabit a part of the industry where workers are so poor that they do not have enough cash to self-isolate even if they’re ill, where staff living seven to a house is not uncommon, where raising concerns results in intimidation or unemployment. These workers are crucial to the nation’s Sunday roasts and midweek chicken stir fries, but you are unlikely to see the conditions they toil and live in featured on TV cooking shows.

If the agriculture bill passes, conditions for workers in the meat processing sector will worsen. Many of the invisible army of migrant workers who kill our livestock and make it fit for supermarket shelves are barely, if at all, protected by employment laws and enforcement agencies as it is. If cheap US chlorinated chicken drove down prices, how long would it take before workers at British firms, where cash depends on production lines running constantly and as quickly as possible, began wearing nappies? It is enough to put you off your food. Next time celebrity chefs warn about the dangers substandard foreign imports pose to the nation’s food supplies, we urge them to help us put workers’ rights on this government’s menu too. 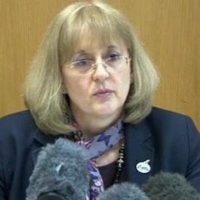 Diana Holland is assistant general secretary for transport, food and agriculture and equalities at Unite the Union.

View all articles by Diana Holland

Bev Clarkson is national officer at Unite for the food and drink industries.

View all articles by Bev Clarkson