Racism is at work and it exists. But, as trade unions, we are committed to eradicating the prejudice and discrimination and disadvantage that continue to deny many Black workers the opportunity to secure decent jobs and careers regardless of educational outcomes.

The trade union movement has been a leading voice on the need to tackle institutional racism over the years. However, a new generation of activists has re-energised and heightened the profile of anti-racist campaigning. We know that an increased focus on anti-racism within the trade union movement will have to be both broad and far-reaching in order to make a real and lasting difference to tackling racial disparities and racial injustice at work, as we build a coalition that is capable of reaching out to organisations across wider civil society.

There is no more important priority for our trade union movement today than to do whatever it takes to stand up against racism and to secure racial justice at work. We know the facts of the hostile environment. Black workers aged between 16 and 24 are almost three times more likely to be unemployed than their white counterparts.

With the government’s immigration agenda, many Black workers are at the mercy of exploitative employers, less able to challenge exploitative employer practices for fear of losing their jobs, their homes and their right to remain in the UK. When the economic outlook is poor and public spending is cut, it is Black workers who will also be amongst those hit the hardest.

Wherever and whenever racism exists, wherever the conditions exist which enable racism to flourish, we must be ready to act and to call it out. But we need to do more than speak out – we must also make a difference.

The TUC anti-racism task force is about establishing the facts and shining a light on racial injustice in the world of work. But it will do much more than that. It will also be about action – organising, bargaining and campaigning to secure real change.

We are determined that the anti-racism task group will mark another important chapter in the history of our trade union movement’s fight against racism and racial injustice at work, and that it will be a powerful force for change.

20 years ago, the TUC Stephen Lawrence task group was set up to root out racism at work. There has been some progress since then, but the reality is that there remains much more to do. Giving voice to the everyday racism Black workers face. Confronting institutional racism and discrimination at work. Demonstrating that our unions are willing and able to take the lead and to secure progress. Change is coming. 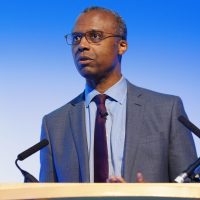 Dr Patrick Roach is general secretary of the NASUWT, the teachers' union. He is currently chair of the TUC anti-racism task force.