At the beginning of the year, HOPE not hate warned that the far right and fascism was now bigger and more dangerous than at any point since the 1970s. The digital age had empowered not just progressive and pro-democracy movements, but also a new generation of radically reactionary populists, the alt-right and neo-Nazis.

As a result of this, and broader economic and social uncertainty, we were living with radical-right and far-right political parties across Europe, and reactionary populist leaders ruling over huge swathes of the world’s population in America, India and Brazil. Indeed, the ‘leader of the free world’ refused to condemn Nazis marching in Charlottesville, regularly promoted far-right and extreme figures on Twitter and asked far-right groups to “stand back and stand by”.

The decade that began with the horrific Utøya massacre in 2011 saw increasingly frequent fatal far-right terror attacks across the world: the Pittsburgh, Poway and Halle synagogue shootings; Christchurch and Bærum mosque shootings; the Hanau shootings; and in the UK the Finsbury Park Mosque attack.

Sadly, the Labour Party and Westminster knows this danger all too well itself. Batley MP Jo Cox was murdered by a far-right extremist during the 2016 referendum campaign, and earlier this month the teenage son of a House of Lords clerk was sentenced for 14 terror offences, including possessing documents useful to a terrorist, disseminating terrorist publications, encouraging terrorism and downloading child abuse images, influenced by a neo-Nazi Satanist philosophy known as the ‘Order of Nine Angles’ (O9A).

This latter case typifies the nature of modern far-right terror. This younger, digital generation are decentralised and outside traditional organisations, radicalising each other via peer-to-peer contacts and unregulated online platforms such as Telegram and BitChute. Whilst jihadist networks are still by far the biggest threat to our safety, far-right terror is now the fastest growing threat in the UK, making up a third of all terror plots foiled by the security services (who have now taken over responsibility for this area from the police).

It is now vital that tackling the danger posed by the far-right is prioritised by parliament and the government. That is why HOPE not hate is joining with committed Labour MPs to launch the Labour HOPE not hate parliamentary group, which will work to expose and educate about the latest threats from the far right and prioritise the issue within the legislative agenda in parliament.

The group, chaired by Stephanie Peacock MP – with support from across the party – will push for the proscription of the O9A movement, which has been implicated in a number of recent terror trials; reform of the process of proscribing terror groups, which is too slow for the digital age; and urgent safeguarding initiatives to protect young people being radicalised.

The struggle against the far right can no longer be considered a niche issue. The threat is real and growing and everyone is at risk, from children to ethnic minorities, the LGBT+ community and women – anyone, in fact, who stands against hate and division. It is now time for all levels of civil society, from the grassroots to the palace of Westminster, to make sure that 2021 goes down in history as the year we stood together in the face of hate – whatever our backgrounds, beliefs or politics – and showed the far right that we will never allow it to scare us or abandon our belief in solidarity, shared values and unity.

The group launches with a webinar at 6pm this evening featuring HOPE not hate CEO Nick Lowles and MP Stephanie Peacock discussing what politicians and campaigners in Westminster and beyond need to do about the far-right threat. Sign up here. 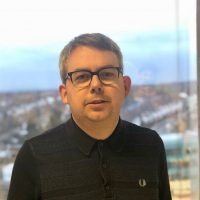 Matthew McGregor is campaigns director at HOPE not hate.

View all articles by Matthew McGregor