New polling has shown that a majority of the British public support the policy of keeping the Universal Credit uplift introduced amid the Covid crisis and would like to see claimants continue receiving an extra £20 a week.

The Universal Credit boost was announced by Rishi Sunak in March as part of a range of coronavirus measures. Although the pandemic is far from over and the vaccine roll-out will take place over many months, the uplift is due to end in April.

According to a new poll conducted by Survation for Unite the Union, 54% of UK adults believe that the increased standard allowance in Universal Credit should be extended beyond April 2021, while 28% disagree. 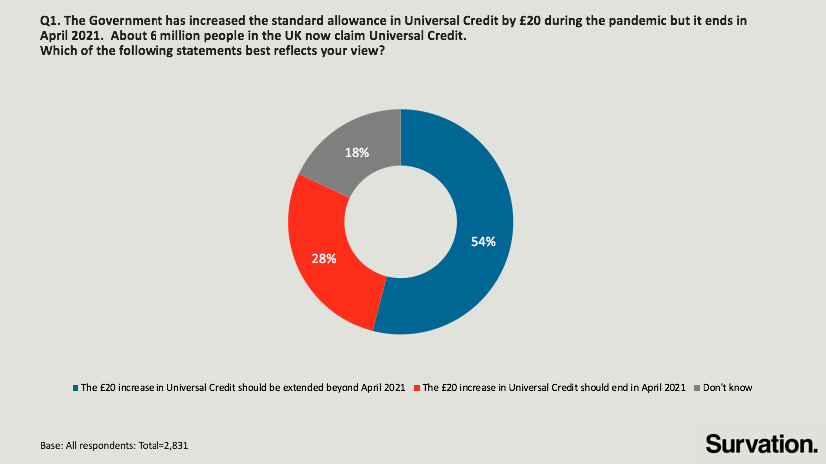 The research suggests that 40% of those who voted Conservative in the general election last year back the policy of keeping the uplift and 70% of 2019 Labour supporters are in favour of the increase remaining in place.

Commenting on the poll, Unite assistant general secretary Steve Turner said: “The basic level of out-of-work support prior to the March boost was – at just £73-a-week (£3,800 a year) – less than half the absolute poverty line.

“People are being asked to get by on a tenner a day… The £20 uplift may seem like pennies to the government, but it is literally the difference between turning the heating on or buying a warm coat for the kids for millions.

“Snatching back this cash will be cruel in the extreme – and will certainly offend the voting public. The IMF and World Bank both warn this is not the time for governments to attack the incomes of the poorest and that to do so would be to imperil recovery.”

“We are urging the Chancellor to make Christmas for the poorest families by saying that the £20 uplift will stay beyond next April. Just do the decent thing and give them this small income security.”

Unite the Union is holding a day of action on Universal Credit. Turner has written a comment piece for LabourList and Unite Community will host a live event this evening at 6pm-7.15pm with Labour’s Jonathan Reynolds.

A new report by the Joseph Rowntree Foundation released today found that destitution rose by 54% between 2017 and 2019 and that 2.4 million people were experiencing “extreme hardship” before coronavirus hit the country.

The JRF noted that half of all destitute households were receiving UC or had applied for it. Some participants told the study that the uplift was a “considerable help, enabling them to afford food, electricity and other essentials”.

The paper also specifies that many of the interviewees “made a direct link between the repayment of UC advances and their need to use food banks”. Labour has called for an end to the much-criticised five-week wait.

Labour demanded five urgent changes to the social security system in April, from converting Universal Credit advances into grants instead of loans to removing the savings limit and suspending the benefits cap.

Campaigners have also called on the government to uprate legacy benefits and provide additional support to those on disability and sickness benefits, who have not benefited from the Universal Credit increase during Covid.

The Department for Work and Pensions has repeatedly claimed throughout the pandemic that changing legacy benefits in the same way as Universal Credit was altered would be “more complex” due to “old” IT systems.