The Scottish Labour Party is a family. Yeah we have our fights and we bicker, but we are nonetheless a big, dysfunctional family. Right now, we are united in a unique sadness as we mourn the loss of the one and only Maria Fyfe who passed away yesterday. Maria was the Labour MP for Glasgow Maryhill from 1987 until 2001. She was also a loving mum to Stephen and Chris and a doting granny to Catriona, Jacob, Max and Peter, as well as a dear friend to so many.

She spent her time in parliament showing the difference a good local MP can make. Whether this was standing up for workers and uncovering the shadowy deeds of the economic league behind the blacklisting scandal, campaigning for nuclear disarmament, trying to build peace on the island of Ireland and across the world, or helping to deliver what John Smith called the “unfinished business” and securing home rule for Scotland.

Perhaps the most defining aspect of Maria’s politics was her unwavering commitment to equality. When she was elected in 1987, Labour sent 50 MPs north of the border to Westminster – and she was the only woman in that number. The famous picture of Scottish MPs standing on the steps of the old party headquarters shows an iconic Maria wearing red in a sea of suits and ties. She spent her whole career as a politician fighting for her sisters and to improve the representation of women. I can think of no legacy she was more proud of than the fact at every election to our national parliament in Scotland, the Labour group has always been 50/50, a feat no other party has matched.

She got a bit of a reputation for being a rebel at times and was not exactly the flavour of the month during the Blair years. The whips’ office had a habit of writing to local parties noting concern at voting records of backbenchers with the hope of spooking rogue MPs into submission over fear of deselection. Only thing is, that didn’t quite work out the way they hoped when those letters made it to Maryhill. When the whips sent a letter to the Constituency Labour Party, they usually got a motion from local members unanimously supporting Maria. But that didn’t mean they disliked Maria – quite the opposite. The Scottish contingent of the Labour government whips’ office, affectionately known by some as the “Green Kremlin”, had songs for their favourite MPs. For Maria, what tune better suited her from a whip’s perspective than How Do You Solve a Problem Like Maria?

Maria stopped being a politician when I was very young, but she never stopped being political. Her work in particular to commemorate the work of Mary Barbour, the leader of the 1915 rent strikes in Glasgow, has finally seen a statue erected in her memory in Govan – only the fourth statue of a woman in the great city of Glasgow. She truly was held in the highest regard by her former constituents and universally adored in our party, even 20 years after leaving parliament.

Comrade Fyfe was a party stalwart through and through. I can never remember her missing a single CLP meeting – even when she was in the hospital recently, she asked her son to phone me and make sure her apologies were noted. The highest praise I will ever probably get in my life was Maria saying I wrote the best set of CLP minutes she had ever read.

One of my favourite memories will be helping to organise a surprise 80th birthday celebration for her along with her closest friend, Anna Dyer. We told her it was a fundraiser and asked if she could bring some things for the raffle – because if she knew we were organising a party for her, she would have murdered us. We allocated the important role of getting her to the hall at the right time to Paul Sweeney, a comrade famed for his punctuality. She walked in the door expecting a Labour social and instead got a rousing chorus of Happy Birthday led by the iconic socialist songsmith Arthur Johnstone. Her face was a picture. She then sought me out, gave me a big hug and handed me a bag of raffle goodies – what a legend. It was a brilliant night.

Maria had some of the best stories you could ever hear and lived a remarkable life. I don’t have enough time to tell them all, but I would urge you to read her book A Problem Like Maria, which talks about her time in the House of Commons, and her new book Singing in the Streets, which details her earlier life growing up in Glasgow, something I can’t wait to read. I am just sad I won’t get to speak to her about it.

Richard Leonard said yesterday in Holyrood, Maria “was an inspiration to generations of Labour Party members”, and she was. She was a great source of support to me and a phenomenal comrade. She was an active CLP member and our vice-chair. I had the pleasure of working with her closely over the last few years as a CLP Secretary and latterly a prospective parliamentary candidate.

She was so passionately committed to political education, determined to have a speaker at every single meeting, and to supporting younger activists. I have had a lot of messages in the last few hours from dozens of members sharing their stories how they were at some event and Maria saw them and made the effort to make them feel welcome. Our CLP meetings are just never going to be the same again without her.

After I was selected last year to stand for her old constituency at the 2021 Scottish parliament elections, she gifted me something that is now one of my most prized possessions – a red revue songbook. Singing was a big part of the labour movement when Maria was growing up, and she always said to me how sad it was we didn’t sing enough anymore. Well, if we can do one thing to honour her, let’s right that wrong: sing those songs and pass them on.

Maria was Labour to her bones, and she never stopped fighting for our movement. She gave her life to Labour. Well, we need to keep fighting. We have a responsibility to do our best and try to do her proud. Rest in power comrade. 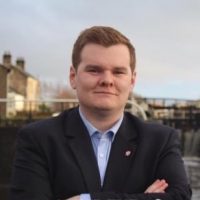 View all articles by Keiran O'Neill