The government must act urgently on air quality. Wednesday’s ruling in the heart-breaking inquest into the death of Ella Kissi-Debrah confirms not only that the government has a long way to go in tackling environmental racism in the UK, but also that it must do considerably more to address the central role that racial injustice plays in climate destruction globally.

The coroner in the inquest into the death of Ella Kissi-Debrah, a nine-year-old from Lewisham in south-east London, ruled that “exposure to excessive air pollution” materially contributed to Ella’s death in 2013. The inquest heard that dangerous levels of air pollution existed close to Ella’s home, consistently exceeding EU limits. This is the first time that air pollution has been listed as a cause of death in the UK, but the UK’s air quality crisis is not news and nor is its disproportionate impact on Black communities.

The Black Lives Matter movement has forced the public to recognise how racism continues to pervade our policies and institutions, and air quality regulation is no exception. In the most ethnically diverse areas in the UK pollution levels are deadly. London air pollution is already killing 9,500 people each year and, despite accounting for just 13.3% of the city’s population, Black, African and Caribbean people account for 15.3% of all Londoners exposed to nitrogen dioxide. In Newham, seven in every 100 deaths is caused by air pollution.

The ruling in Ella’s inquest came on the same day that the Supreme Court overturned a decision that found the government’s airports strategy unlawful for its incompatibility with UK climate targets. This opens the door for potential Heathrow expansion and the devastating consequences this would have on air quality and climate change.

The impacts of airport expansion on Black families in the UK can already be seen in east London, where the most ethnically diverse boroughs already face life-limiting air pollution levels. City Airport has been allowed to expand, concentrate flight plans and increase passengers, while the road-building lobby has continued to target the area for hugely polluting expansion plans. This is mirrored elsewhere, as in the US, where race has been shown to have a stronger influence on exposure to pollutants than poverty.

Our carbon emissions are exacerbating the health impacts caused by air pollution. The heating of the air caused by climate change traps air pollutants close to the ground, further reducing air quality. Not only does reduced air quality cause cardiovascular disease, strokes and cancer, but Black mothers exposed to high temperatures or air pollution were found in a US study to be more likely to give birth to premature or underweight babies or have a stillbirth.

This is a symptom of the systemic racism that has always been at the root of the climate crisis, driving centuries of colonisation, resource extraction and inaction towards supporting those already hit by climate destruction. Globally, Black people are bearing an unequal share of the danger and damage from climate change and pollution.

During the pandemic, the disproportionate impact of climate change and pollution on Black people is felt worse than ever. Public Health England has found that Black people have “between 10 and 50% higher risk of death” compared to white people. Now, there is strong evidence of a causal link between air quality and Covid incidence and mortality, so those in polluted towns and boroughs are placed at even greater risk. Pre-existing social inequalities already contributed to the UK at one point recording the highest Covid death rate in Europe. How many more lives must be lost before the government acts on air quality and pollution?

The UK government is hosting the 26th UN Climate Change Conference (COP26) next year, yet it is failing to lead the way on air quality. The environment bill, whilst setting new air targets, fails to enshrine World Health Organisation guidelines on PM2.5 and NO2 limits in law or set out the policy framework required to achieve their targets. Despite claiming to show climate leadership, at Saturday’s climate ambition summit – marking five years since the 2015 Paris Agreement – the government made inadequate pledges to reduce emissions by 68% on their 1990 levels by 2030.

We welcome London mayor Sadiq Khan’s response to the conclusion in Ella’s inquest. “Toxic air pollution is a public health crisis,” he said. “Ministers and the previous mayor have acted too slowly in the past, but they must now learn the lessons from the coroner’s ruling and do much more to tackle the deadly scourge of air pollution in London and across the country.”

The needless loss of life resulting caused by our government’s inaction on air quality was one of the driving forces behind the Labour Campaign for Human Rights establishing our new climate justice campaign. We exist to ensure that the Labour Party commits to tackling the causes of climate breakdown, and advances the rights of the communities most affected.

Families like Ella’s have been at the forefront of challenging racial injustice in the UK, yet Black lives continue to be disregarded in environmental policy and climate action. The government must immediately address the UK’s air pollution crisis and put in place robust systems for improving air quality. In the run-up to COP26 in November 2021, the UK needs to recognise the inequitable outcomes that climate change and pollution are continuing to cause for Black communities and set ambitious targets that put racial justice and social justice at the centre of climate action. 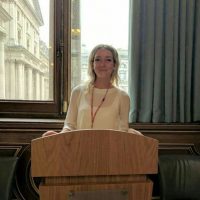 View all articles by Lana Hylands