I grew up in the 1980s with very little idea at the time about the devastation that was happening across the country with a new and largely poorly understood virus. Even during my teenage years, HIV was something rarely spoken about, never mind properly explained at school. It was left to rumours and whispers in the playground to shape young people’s knowledge and attitudes to HIV – these were often steeped in homophobia, racism and misinformation.

Russell T. Davies’ instant classic It’s a Sin has us glued to our TVs. In our household, we have laughed and cried in equal measure and, judging by social media, it has been an awakening for very many of us about HIV and its impact in the ’80s. But the long-lasting feeling is one of anger. Let’s not pretend HIV was not spoken about at the time, it was. Hard-hitting government adverts such as the chilling tombstone public information film, combined with leaflets landing on every doorstep in the country, meant HIV was there for everyone to see. Many people just chose to look elsewhere. Often because of stigma, too often because of prejudice.

That is why the character of Jill is so powerful. She captures the very essence of allyship and why HIV is everyone’s responsibility. When little information is available in London, she has to source it from New York. Even her GP refuses to help her, dismissing it as something that only impacts gay men. This attitude has served everyone so badly, both because it further stigmatises gay and bisexual men, and because it erases the fact that HIV does not care for sexuality, gender identity or ethnicity. Nearly half of those living with HIV in the UK are heterosexual; one third are women and one fifth are Black women.

Before parliament, I had the public health cabinet portfolio on Nottingham City Council. I gained a real insight into the huge progress we have made in the fight against HIV, which now means a HIV diagnosis is no longer a death sentence and the vast majority of people living with the virus can expect a normal and healthy life. During my time in local government, I saw first-hand how invaluable local testing and support services are to engage all demographics in HIV and wider sexual health – and the damage that public health cuts are doing to them.

For friends and some colleagues of mine, however, they had no idea that all this progress had happened. HIV has been one of the biggest success stories in modern day science and yet it has largely passed people by. We need to shout loudly and proudly about these huge achievements because silence means attitudes about HIV remain stuck in the past. A recent poll for Terrence Higgins Trust found that half of the British public would not kiss someone living with HIV and a third would feel “uncomfortable” on a date.

That is why Jill’s character really struck a chord with me. I want everyone to realise that they have a part to play in this fight – both to better support the 100,000 plus people living with HIV in the UK, but also to help end the HIV epidemic once and for all. That means zero new cases of HIV by 2030. A big challenge, yes, but one we cannot shy away from. It is something I am proud the Labour Party supports and my colleague Jon Ashworth did this brilliant thread on social media at the weekend underlining what the government urgently needs to do right now.

As shadow public health minister, I will do all I can to fight tooth-and-nail for real-terms investment in our vital frontline local health services, which are the bedrock of efforts to find the 6,700 people living with HIV who remain undiagnosed. Slashing spending is not an option: the government needs to wake-up to this, otherwise we risk shuddering to a halt in reducing new cases of HIV.

While Labour leads the charge in parliament in our fight to end the HIV epidemic, and works to be in office to do what the Tories are not, there is something that all of us can do. This week is National HIV Testing Week and I am proud to join party colleagues in giving HIV the finger by doing a test. It takes just a few minutes and anyone living in England can order a free testing kit. Testing for HIV no longer means an agonising wait of weeks and going to a dark hospital basement. You can do it at home and get the results within just a few days.

A popular sentiment online after watching It’s a Sin is that we would all like a friend like Jill. Of course we would – she is kind, empathetic and will do anything for her friends. The reality is, though, that we all need to be a friend like Jill. It is all of our responsibility to step up and take action, just like Jill. We have come a long way and we have all the tools to reach the 2030 goal. The message of It’s A Sin is that sitting on our hands and looking the other way is simply not an option – and that’s a lesson all of us should act on.

Order a free HIV test kit to do at home for National HIV Testing Week, via the It Starts With Me website startswithme.org.uk. 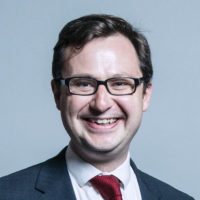 Alex Norris is MP for Nottingham North and shadow minister for levelling up, housing, communities and local government.

View all articles by Alex Norris