A woman regularly emails me as leader of the council, telling me exactly what she thinks. I’ve never met her, she doesn’t want to meet me and insists she wants no help, but in the meantime she’s become one of my barometers of how people are really feeling in the Bradford district. She has expressed varying degrees of fear, anger, confusion and frustration over that time, and serves as a reminder, if one were needed, that people’s mental health has been badly affected after many months of living in local restrictions in West Yorkshire. One of her emails to me said “people are at end of their tether now, it’s getting to the point where people can’t take anymore nothing to look forward to, it’s not a life”.

At the time of writing, in Bradford we have hit the awful and poignant milestone of 1,000 Covid deaths, 1% of the terrible 100,000 UK death toll announced on the same day. Each one of those individuals is a treasured family member, a friend, a colleague, a loved one to those left behind. Our communities are under strain and, as local leaders, we hear people’s concerns even down to street level. We are connected to our communities. With the best will in the world, that’s something a national system parachuted in from Westminster will never have.

We recognised early on in Bradford that this local knowledge would be a vital tool. Covid is like a heat-seeking missile, it can quickly pass from person to person, until infection levels are rising at an alarming rate. Bradford is a big and diverse place, a key worker city where most people can’t work from home. We have significant ethnic minority populations that we know have been disproportionately affected. Health inequalities are very much in evidence. Our response therefore had to be locally-led and fleet of foot to reflect the different needs of the communities we serve.

When the first cases emerged, we quickly mobilised the first response: regular briefings with our public health experts, staff equipped to work from home and we pushed out those first messages to wash hands, clean surfaces and “catch it, bin it, kill it”. We are fortunate in Bradford to have strong expertise, including the world-leading Born in Bradford project led by epidemiologist Professor John Wright, with a background in setting up public health systems in the UK and overseas. We immediately knew the importance of an intelligence-led, localised approach.

In those early days, we set up our own testing site with local health agencies primarily to test care workers. In the following weeks, the government set up three test sites, including a walk-in centre in the heart of Bradford City Centre and another in Keighley. We also had mobile testing units and got permission from Public Health England to go out with door-to-door home testing kits to pick up asymptomatic cases in areas with high rates, reaching as many as 600 tests a day sending trusted figures into communities in advance to build a rapport.

In August, we were one of the first 10 local authorities to start local contact tracing, investing £1.6m in our local test and trace. It became clear that the national system was only reaching 72% of cases and had gaps. Our local test and trace seeks to contact all positive cases not traced through the national system – the two combined successfully reaching a rate of around 84%, exceeding the PHE target. We have employed 60 contact tracers making as many as 180 calls a day.

The local test and trace approach hasn’t stopped there. We’ve offered individuals support to self-isolate and referred them to local help. We’ve lobbied government to increase the financial support for people self-isolating. We increased our door-knocking to reach many of those who have not responded by phone. The feedback we get on the doorstep also gives insight into the prevailing attitudes and fears of our communities, feeding in to the intelligence-led weekly reports at the Outbreak Control Board for action. We invested in neighbourhood wardens and youth services, worked with VCS partners and ramped up enforcement to support the four-pronged strategy: Engagement; Education; Support to Isolate; and Support to Access Testing.

We’ve continually adapted our approach with each wave of infection and cannot be complacent. We are all hopeful for a positive impact of the vaccine rollout. We are urging the government to think about health inequalities within this vaccination programme. Nobody disagrees that the elderly must be vaccinated first, given the high death rates in this age group, but below that age group many local councils have disadvantaged communities with shorter life expectancies and poorer health outcomes. These are vulnerable at a younger age to the virus, so there must be flexibility in vaccine distribution. Using age alone bakes in health inequalities into a vital piece of public health intervention. Meanwhile, we are investing significant sums to prepare for the strongest possible economic recovery – investing in jobs and skills, in education – to support resilience and stimulate hope for a better future.

I think back to the woman who emails me and tells me her worries, and other residents who do the same. I know what long-lasting impacts this pandemic is going to have on the communities we serve, the places we know so well. Local government will need to be properly funded and equipped to support the healing of our communities and our nation well into the future if we are to recover. But it’s not just recovering to where we were, that’s not good enough. This virus has exposed the inequalities in our nation – and when it gets to recovery, we have a moral obligation to focus on fundamentally eliminating them for good. 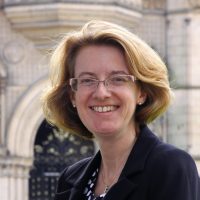 Susan Hinchcliffe is the Labour leader of Bradford Council.

View all articles by Susan Hinchcliffe