The police, crime, sentencing and courts bill will be felt in marginalised communities more than any other. Those of us who continuously rejected the covert human intelligence sources bill in recent months did so partly due to the impact that it would have on the freedom to protest. That freedom is being challenged yet again through the authoritarian measures proposed in this bill.

People across the country watched last weekend in horror as evidence emerged of disgraceful police conduct towards peaceful attendees of a vigil to mourn the murder of Sarah Everard. Many expressed a collective anger and despair that so many women still suffer violence at the hands of men as part of their everyday life.

Despite the government’s attempt to conjure up ‘smoke and mirrors’ this week as part of damage control, this incident shows that there are still serious questions to be asked over the powers that our police forces have, the way that these powers are executed, towards whom they are targeted, how they are scrutinised and how those with such power are held account.

The government regularly expresses concern about the standards of human rights in other countries. Yet, if the PCSC bill is enacted, the director of well-respected human rights organisation Liberty says it would “expose already marginalised communities to profiling and disproportionate police powers through the expansion of stop and search, and Gypsy, Roma and Traveller communities may face increased police enforcement through the criminalisation of trespass”.

Whilst we are in the grip of the pandemic, with enormous powers being passed on to the police to enforce coronavirus rules, it is shocking that the government plans to hand over yet more powers, masked by the pretence that these laws are being proposed to make communities safer.

Protests are often a space for those most marginalised to make their voice heard. In the last year, we saw this in the Black Lives Matter protests and we saw it over the weekend. We also saw police ride into protesters on horses last year, and violently grab women last Saturday.

Freedom of speech, intrinsically linked to the freedom to protest, should be enshrined in our legislation, ensuring it is available to all. This bill would give the government even more power to decide whether a protest is allowed to go ahead. No wonder people up and down the country are alarmed, especially given our current Home Secretary has referred to anti-racist Black Lives Matter protesters as “thugs”.

The crux of the matter goes beyond this, however: the right to protest must be protected, or else we find ourselves on an extremely worrying path, with a totalitarian government able to silence whomever it chooses.

The police, crime, sentencing and courts bill also threatens the way of life for Gypsy, Roma and Traveller communities, through greater police powers targeting them. Likewise, despite the rhetoric, all evidence indicates that it is not likely that the bill will even cut crime and make those that are not being targeted in the bill safer.

Successive governments have brought in longer sentences and planned to create more prison places, yet this hasn’t reduced crime or slowed the rate of reoffending. At the same time, the over-representation of Black, Asian and ethnic minority communities in the prison population and deaths in custody continues to blight our criminal justice system.

This bill does not include any specific measures to prevent male violence against women and girls, nor does it address the fact that a large proportion of women in prisons are survivors of domestic abuse and other types of gendered violence.

Dr Kate Paradine, chief executive of Women in Prison, has pointed out that there is “no evidence that harsher and longer prison sentences make our communities safer or help rehabilitation”. She argues that “alongside building more prison places, this bill risks entrenching inequality and an already archaic system without solving the harms that plague our society”.

This legislation will be felt in marginalised communities more than any other. It will be felt by women unable to protest at the everyday violence they face, and by those from ethnic minority backgrounds, whose lives are policed disproportionately and who suffer with that every day.

It will be felt by Gypsy, Roma and Traveller communities unable to maintain their way of life because of a government that legislates to other them. It will be felt by trade unions, anti-racist campaigners and climate emergency activists when they try to change the world for the better. 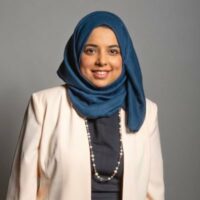