Charlotte Nichols has apologised on social media for the “hurt caused” by a Labour campaign leaflet, which the MP was pictured delivering, that told residents the party is “dealing with Traveller incursions”.

Responding to reactions to the campaign literature today, the shadow women and equalities minister said she had not been aware of the “problematic” definition of the term ‘incursion’, which means a sudden invasion or attack.

“I can understand concerns raised about the language in a recent leaflet, particularly in the context of the draconian measures in the police, crime, courts and sentencing bill, which pertain to GRT [Gypsy, Roma, Traveller] people,” Nichols said.

The bill recently passed it second reading and follows the Tory manifesto pledge to “tackle unauthorised traveller camps”, creating an offence of “residing on land without consent in or with a vehicle” and gives the police seizure and forfeiture powers.

Human right group Liberty director Gracie Bradley has warned that the implementation of the legislation will result in GRT communities facing “increased police enforcement through the criminalisation of trespass”.

Hundreds of charities, community groups and campaign organisations wrote to the Home Secretary last month to express their “profound concern” at the government’s proposed law, describing its provisions as “draconian”.

Labour voted against the police, crime, sentencing and courts bill in March and attempted to stop its passage, but the bill passed by a majority of 96 MPs voting in favour. Nichols voted against it.

“I am trying to be an ally to the GRT community, but antiracism is an active process that means being willing to listen and to learn,” the Labour MP for Warrington North wrote in the statement issued this morning.

“I’m more than happy to sit down with community representatives to discuss more appropriate terminology to talk about sensitive issues like these and how we can work together to best ensure the needs of the community are met going forward.”

Below is the apology issued by Nichols today. 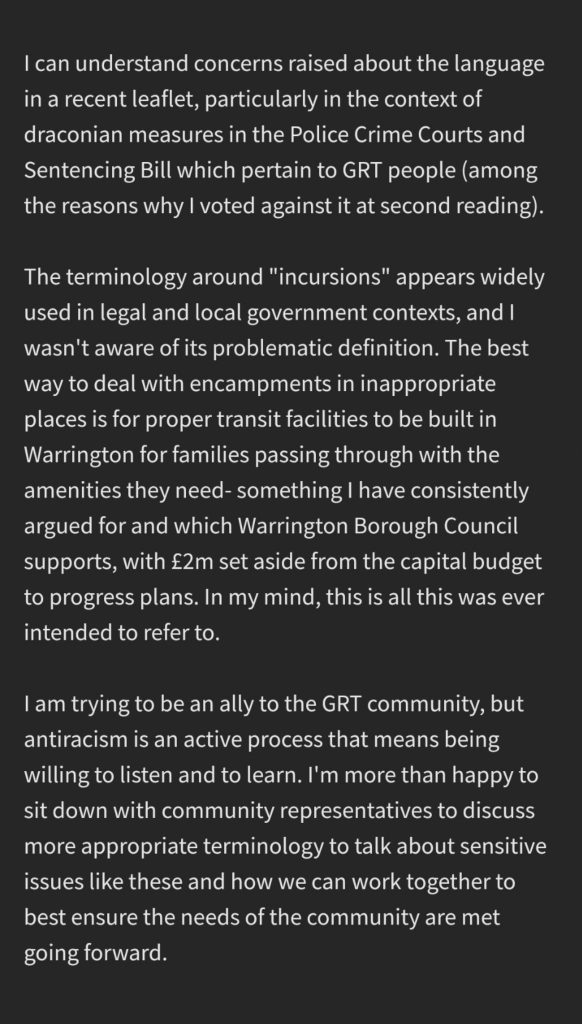