New research published by YouGov this morning has found that while Labour members said that they are largely supportive of Keir Starmer, they are split over the party’s chances of success at a future general election.

The view of the Labour leader among members was largely positive – 74% favourable and 24% unfavourable. Shadow Foreign Secretary Lisa Nandy ranked a close second with 69% having a positive opinion of her and 16% not.

But 84% of respondents to the survey said that the Conservatives would win a snap election if held the next day, and members were split over a 2024 election result, with 43% saying that Labour would win and 40% predicting a Tory victory. 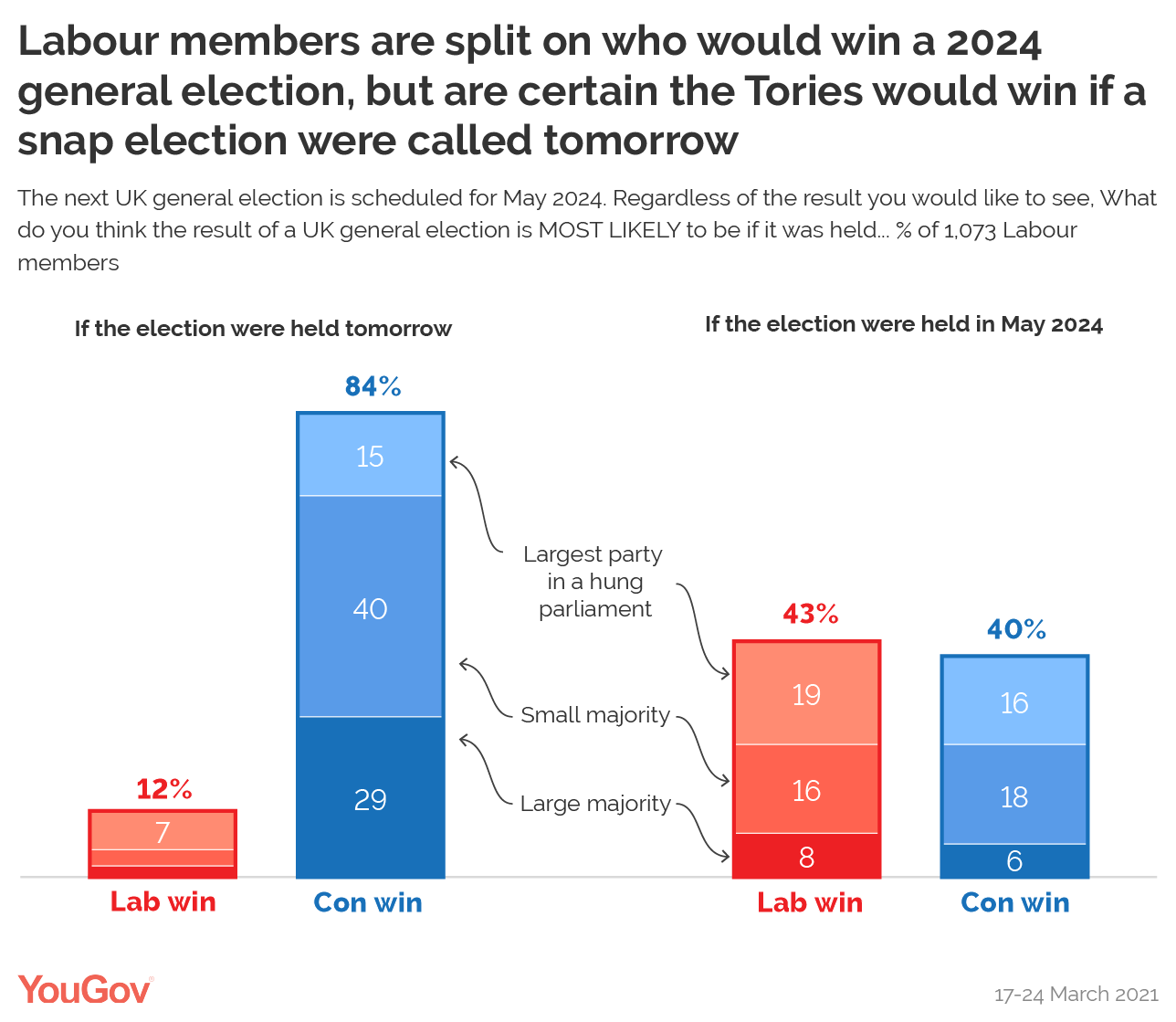 A majority of members surveyed said they believe Starmer is doing a better job as leader than his predecessor Jeremy Corbyn. 61% reported that he was doing better, with 39% saying “a lot better” and 22% opting for “a little better”.

39% of members reported that they thought Starmer is doing worse than Corbyn, broken down into 10% who thought that the new Labour Party leader is doing “a little worse” and 19% who felt that he is doing “a lot worse”.

A fifth of respondents, 20%, said that the Labour leader is a centrist, with many describing themselves as more left-wing than Starmer. Only 6% of members in the research viewed the party or their own position (6%) as centrist.

Half said that Starmer (50%) and Labour (52%) are slightly left-of-centre, while only three in ten (29%) put themselves in the same category. 46% described themselves as “fairly left-wing” but only 17% said the same of Starmer.

18% of members reported that they were “very” far left while just 2% described the party as such and 1% characterised the party leader in this way. 36% said they thought that the party is “fairly” left-wing.

This represents an increase from polling carried out in January 2020, since which time 57,000 members have left the party, when 29% said that they were open to “moderate” compromises and 42% said they would only accept “small” concessions.

Recognition was low for senior Labour figures. 28% did not have a view on Shadow Chancellor Anneliese Dodds, half were unsure about Welsh leader Mark Drakeford and 67% did not have an opinion on Shadow Home Secretary Nick Thomas-Symonds.

This is in line with comments made during a recent focus group. “They haven’t been publicised,” one participant said. “Apart from the leader, he’s on national television all the time, I couldn’t even pronounce or write the name of his right-hand man.”

Gordon Brown ranked as most favourable among former Labour leaders. 81% thought of the former Prime Minister favourably, compared to 78% for Ed Miliband, 74% for Clement Attlee, 69% for Neil Kinnock, 55% for Corbyn and 54% for Tony Blair.

59% of members reported that they would like the party to campaign to rejoin the EU. But more expressed the view that health (65%) and the economy (51%) are the most important issues facing the country, over Brexit on 46%.

Labour has resolved not to work to see the UK rejoin the EU, with Starmer having said that there is “no case” for the move. Labour Hartlepool by-election candidate Dr Paul Williams told LabourList that he agrees with the stance.

Williams, who represented Stockton South in parliament between 2017 and 2019, broke the whip to oppose leaving the EU and support the proposal for a fresh referendum. But he said earlier this month: “I have no desire to be going back.