The race has narrowed to become the next leader of Unite. On Friday morning, we learnt that Howard Beckett has stepped down, to back fellow assistant general secretary Steve Turner. Some, but not all, of Beckett’s pledges have made it into Turner’s updated plan, including proposals for a Unite TV service. Pressure remains on Sharon Graham, the only female candidate to step aside. She understandably does not want to. And neither she, nor Beckett, should have to.

Unite’s half a million affiliated members have a major role in shaping not just Britain’s leading union, but the direction of the wider movement. Yet the debate has been fiercely distracted. The pieces filling progressive publications aren’t about manifesto pledges, how to build membership, or candidates’ personal stories. They are about one thing: vote splitting.

The left vote remains ‘split’ between two very different left-wing candidates. That’s why roughly three quarters of Twitter commentary about the race is focused on who should step aside. But the debate about standing down is a debate we shouldn’t need to be having. All three left-wing figures – Graham, Turner and Beckett – have distinctive pitches, strong support and different leadership styles. In fact, the debate is so fierce because there are real differences between the left-wing candidates. Who wants to deprive their supporters of a say?

And, having secured hundreds of branch nominations each – 1,200 of the 1,400-odd nominations made, in fact – they all commanded sizeable support. To the extent that, collectively, the combined ‘left vote’ is likely to be stronger than the ‘moderate’ one. Not just in Unite but other unions too, one ‘side’ of the union could get 60% of the vote, but be totally locked out of representation.

While the left candidates’ supporters battled it out over whether Turner, Beckett and Graham should step aside, the other candidate, Gerard Coyne, was simply getting on with it. It’s a strange microcosm of what has been happening more widely in British politics for over a century. We should start by looking at last month’s local elections.

One faction takes all

In the May local elections, on average two candidates from Labour, the Greens and the Lib Dems were running against just one right-wing candidate in England, according to research for the Politics for the Many campaign – the trade union group for political reform. In nearly half of all wards, there was one unified ‘right’ party (the Conservatives) standing candidates against three of the main progressive parties. Astonishingly, there were only 1.3% of wards where there were more right-wing parties standing candidates than left-wing ones.

England’s winner-takes-all voting system meant that voters on the left were effectively being punished for having a choice of parties to vote for. It’s no wonder many people simply sit it out. It means that millions of people had to hold their nose, opting to support a party they viewed as a lesser evil, or risked seeing their vote ‘let in’ a right-wing party – a problem that voters on the right do not face. When you can’t express your actual voting preferences, it all hinges on one X in the box. If your first choice doesn’t have enough support, there’s no backup; your vote is systematically ignored.

No surprise then, that the Conservatives are currently trying to impose the first-past-the-post model on mayoral and police and crime commissioner elections. Coincidentally, Labour performed well in these last month, while being disproportionately locked out of (first-past-the-post elected) council chambers. In Britain, as elsewhere, winner-takes-all voting systems benefit a winner-takes-all politics, rather than one that values working together, pluralism and the idea that we have more in common than that which divides us.

Last year, Labour abolished first past the post for electing its constituency representatives on the national executive committee. Despite some initial scepticism, nearly everyone came round in the end: it meant that rather than entire wings of the party being excluded each election, everyone had a fair shot. There’s a reason that both Momentum and Open Labour back proportional representation: the Westminster-style, first-past-the-post model is a recipe for disengagement, alienation and apathy – not the equal politics we need.

With a preferential voting system, you can rank candidates by preference, almost entirely eliminating the issue of votes being ‘split’. Voters can always vote for who they believe in, and express a range of choices. This instant, run-off system lets you focus on the real issues. All Unite’s members, like voters more widely, deserve elections with real choice and fair representation.

Indeed, the union movement is turning away from first past the post – only this month, ASLEF backed proportional representation. Because until all votes count equally, we’ll keep fighting over seating arrangements for the Titanic. In Unite and in Westminster, a preferential voting system like single transferable vote, used for Scotland and Northern Ireland’s local elections, would be a game changer for voter choice. It could also transform our debate. Frankly, a lot of people are tired of spending more time talking about ‘stepping aside’ than about actual politics. 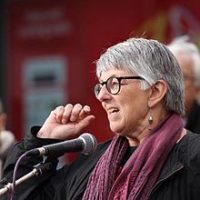 Julie Ward is a Unite member and former MEP.

View all articles by Julie Ward

Paul Cooney is a Unite activist in Yorkshire.

View all articles by Paul Cooney