Keir Starmer has used a party political broadcast this evening to urge the public to “call time” on Boris Johnson’s government, which he argued is “asleep at the wheel as families struggle with a cost of living crisis”.

Addressing the public today, the Labour leader told viewers: “My contract with the British people will build a new Britain – which guarantees families, businesses, and pensioners – the security, prosperity and respect they deserve.”

The Conservatives are distracted by infighting and scandal while families across the country struggle with the cost-of-living crisis.

Labour’s contract with the British people will build a new Britain which guarantees security, prosperity and respect for all. pic.twitter.com/5ldOX7yMu2

His comments come as households facing rising inflation, with utility and food bills rising sharply. Starmer accused Johnson at Prime Minister’s Questions of being “distracted” from combatting the “cost of living crisis” by the ‘partygate’ scandal.

Labour used the message this evening to set out its plan to ease the burden on households. Rachel Reeves said: “Our plan would save households around £200 a year, with an extra £400 for the families and pensioners who need it most.

“This would be paid for by a one-off windfall tax on the north sea oil and gas producers who’ve made a fortune from rising prices. But we need more than just short-term relief. Labour has a plan to reduce energy bills by insulating millions of homes; properly regulating the energy market; and investing in nuclear and renewables.”

The broadcast from Labour followed several weeks of significant political pressure for Johnson. Allegations that numerous Covid rule-breaking parties were held in Downing Street and other government buildings throughout the pandemic, including at the height of the first lockdown, have emerged in recent weeks.

Starmer demanded the resignation of Johnson earlier this month after he apologised for attending a social gathering in May 2020 but insisted that he believed the gathering was “a work event”. Johnson reiterated this defence on Tuesday, also telling journalists that “nobody told me” the party breached the rules.

At least 11 of the 2019 Tory intake have submitted letters of no confidence to the 1922 committee, according to The Telegraph. Letters from 15% of Tory MPs is required to trigger a leadership contest, which is currently just over 50 MPs.

Conservative MP for Bury South Christian Wakeford, elected to represent one of the ‘Red Wall’ constituencies lost to the Tories in the 2019 election, defected to the Labour Party just minutes before Johnson entered parliament this afternoon.

Welcoming the new Labour MP today, Starmer argued that “Labour are the only ones who have put forward a plan to help people through the Tory cost of living crisis” while the Conservative Party is “distracted by a chaos of its own making”. 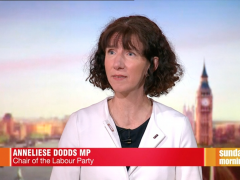