Boris Johnson’s lies in parliament have covered many topics, but one of the worst is that employment is back to pre-pandemic levels. This ignores the millions of people who are self-employed. The same people who were excluded from support during the pandemic are still being excluded. The Labour Force Survey shows the number of people in employment overall is below where it was before Covid-19 hit. This is because there are now far fewer self-employed people, and we are not sure where they have all gone.

Part of the problem is that our understanding of who is self-employed, what they earn and why they want to do it is patchy. The figures quoted by Johnson in parliament come from PAYE data, which is easy to collect as employers have to submit returns to HMRC, and they will chase you and fine you if they are late. Data on self-employment comes through the Labour Force Survey, which takes longer to compile and does not include key details needed to understand the sector.

The other reason that the lies and lack of support for self-employment continues is because we currently lack an accountable, independent voice. There have been many times over the last two years where I’ve shouted at the TV because a minister was airing their ignorance, like the time Rishi Sunak said you could rent a pub for £14,000 a year, when the true figure is about three times that outside of London. If he had publicly been that wrong about the salary of a nurse, he would have been quickly pulled up by unions, even if like so many other figures they are never corrected. Yet these were the figures used to set how much we would receive in grants.

It’s why, during this #HeartUnions week, I’m proud to be a member of Community Union and part of shaping their work with other self-employed members in developing a section in our own right. There has always been strong union support for self-employed workers in the movement, which has been led by sector specific unions like the Musicians’ Union, BECTU, NUJ and more, but there are self-employed people in every sector across the UK economy who need a union in their corner and to have their back.

A number of issues have needed a proper discussion for years, only to be put off because the problem was seen to be too difficult. The best people to have these conversations are, of course, those with the relevant experience. Millions of people were left with nothing and completely abandoned during lockdowns because of basic mistakes made by people do not understand how the self-employed work. We also had to face the suspicion that the self-employed are a fraud risk or tax dodgers who somehow deserve it.

Any conversation about self-employment will very soon turn to tax. There is a suspicion that freelancers pay less tax than employees, when the difference in tax receipts is made up of the employer’s National Insurance contributions. The other conversation is about bogus self-employment, which is an issue that needs tackling but represents a small fraction of the total number of self-employed.

Both conversations miss the point. We are all working people and we want what any other working person wants: rights at work. We want the security of knowing there is a safety net if it goes wrong, prosperity through fair recompense and respect through having our concerns listened to and acted on.

Community Union has been working on how to support self-employed people through peer-to-peer support and advice, access to training and campaigning on sick pay for the self-employed. More work is on the horizon, including support in pay negotiations. For the self-employed, pay negotiations happen with every single job. Earnings from self-employment can be high, but there is a longer tail with those at the bottom earning less than the minimum wage when all of their working hours are taken into account.

There is urgent work to be done on equalities. Women are more likely to be part time if they are self-employed; whether this is through choice or through necessity is not well understood. As with employment, women tend to work in sectors such as care and service, whereas self-employed men are most likely to be in construction. Where there is evidence about pay gaps, it shows that they are wider for self-employed women. An intersectional approach is required: ethnicity and disability pay gaps also need far more attention and research.

Self-employment won’t be right for everyone. Some people find it liberating, and for many starting your own business is aspirational. For others, it is seen as too much of a risk. There are ways that this risk can be reduced. There are ways to ensure that everyone gets the living wage and enough to cover holiday periods. We can start by ensuring all our voices and experiences of work are heard.

Security, prosperity and respect should belong to all, regardless of tax or employment status, and the membership of a union to act collectively is an important first step. 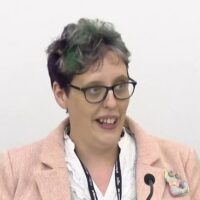