Call me cynical, but Michael Gove announcing an “explosion” in new council housing less than three weeks before crucial local elections seems a little desperate. If past behaviour is the best indicator of future performance, then the over one million households waiting for a social home and all those who believe the state has a role to play in providing decent, genuinely affordable, secure housing for people should be worried. From Margaret Thatcher massively expanding the Right to Buy, seeing over 2.5 million homes sold off (with over 40% of these now being turned into private-rented homes often for those on council waiting lists), to George Osborne and David Cameron attacking local government and slashing affordable housing grant, the Tories have form and shouldn’t be trusted on council housing.

The need for social and council housing is clearer with the right to a decent home, on a secure tenancy, on a genuinely affordable rent being needed now more than ever. Gove’s reported plans – and at this stage that’s all they are, ‘reports’ – are to scrap section 106 and replace it with a levy on new developments.

Currently, s106 is used to secure investment in a local area impacted by a new development and is used for things like transport, contributions for schools and environmental improvements along with new affordable housing – which once delivered is then bought at a heavily reduced rate by registered social landlords like housing associations or (in some cases) councils. Councils also charge a community infrastructure levy (CIL), which is used to invest in infrastructure to support future growth (again, transport, schools etc) with the bulk of this money being able to be spent anywhere in a council area rather than directly near to the scheme.

Whilst bringing in CIL was broadly a positive, the lack of grants from central government to support new social and council housing is a major problem. Whilst new developments should, and must, contribute to delivering new affordable housing, this will not be enough on its own to match the scale of the challenge our country faces. Gove’s plans to shuffle around s106 contributions – from new developments, infrastructure or local improvements to a notional council housing fund – won’t deliver the homes we need. Instead, the government should aim to switch (over time) some or all of the £22bn we spend every year on housing benefit, which has doubled in 20 years as the private-rented sector has rapidly grown, and instead bolster the £8bn we spend on supporting new affordable housing. In addition, councils should be given even greater freedom to borrow to invest in new council homes, and councils should be given support in establishing new build council home departments.

Gove’s announcement also hints at the dead hand of the Treasury and exemplifies the lack of vision or understanding of what the country needs. Whether it’s tackling the climate emergency, the cost-of-living crisis or housing, this government’s actions fail to meet those challenges. If the Treasury is not willing to invest in new council housing, shuffling developer contributions around won’t deliver the homes we need and could well lead to worse quality places with poor transport or other supporting infrastructure. Putting councils in the position of choosing between housing and needed transport or school improvements is no way to ‘level-up’ the country.

During my time as a councillor, I had the privilege of growing and delivering Southwark Council’s new council home pipeline. When I stood down from the council in 2018, there were over 2,000 new homes complete, on-site or in planning and since then the programme has grown further. Setting up the teams to deliver these homes, procuring architects, consulting with residents and establishing a local lettings policy all took time and we learnt a lot on the way. Not all councils have this strategic depth and they should be supported. I firmly believe the way to do this is through greater devolution in England (and the other devolved nations) to local government and metro-mayoral government so that local areas have the tools – and finances – at their disposal to meet the challenges their residents face.

Listening to people, putting our shared values into practice and delivering change that helps people live their lives to the fullest, regardless of background or circumstance – this is what Labour in power is all about, whether that’s in the town hall, City Hall or Whitehall. Labour in local government is ambitious and is a great example of the best of our labour movement. As a former councillor, I’m heavily biased in favour of the power of local government and what it can do to transform people’s lives. Together with a Labour government giving them the funding and powers they need, we can achieve great things as a labour movement after the next election.

So, as we all continue to pound the streets on the #LabourDoorstep over the next two weeks remember what we are campaigning for: Labour councillors and Labour councils delivering for people and laying the foundation for a Labour government. 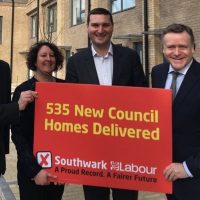 Mark Williams is a former Labour councillor (2011-2018) and was cabinet member for regeneration and new homes at Southwark Council (2014-18).

View all articles by Mark Williams