When it comes to the question of achieving peace in the Middle East, Labour is clear: in government, we would immediately recognise the state of Palestine. We want to see a two-state solution, with a sovereign and secure Palestine and Israel existing in peace alongside one another. But we must acknowledge how far away that goal is.

Having just returned from a week’s visit organised by Medical Aid for Palestinians and the Council for Arab and British Understanding, I have never been clearer in my mind that the Israeli occupation of the West Bank and Gaza is a fundamental obstacle to achieving this vision.

Of course, the occupation is illegal under international law, and there are many Israelis who strongly oppose it. I met with Israeli politicians and citizens during our visit who, like me, see the occupation as harmful to Israel’s peace and stability because of the humiliations it inflicts upon the Palestinian population.

Our delegation saw so many examples of this: Palestinian children undergoing draconian treatment in military courts; demolitions of homes and communities in East Jerusalem; demolition orders on basic infrastructure in the West Bank, including a health clinic partly funded by UK aid; the segregation of road use in Hebron between Palestinians and Jews; the huge expansion of illegal settlements on Palestinian land; the construction of a barbed wire and concrete barrier that cuts across Palestinian communities – to name just a few. It is impossible to document them fully here.

One example, however, sums up the brutal reality of occupation. In Makassed hospital in East Jerusalem, early on the first morning, our delegation was shown into a high dependency neonatal unit containing nine cots. In each, a premature baby lay under glowing heaters, fragile and tiny. All these vulnerable babies were alone. None of them had their mother or another family member with them.

Why were these babies alone? Firstly, the occupied territories are unable to provide the hospitals to treat complex births or premature children – hence the need for some mothers to give birth in Makassed hospital. Secondly, under the rules of the occupation, mothers are allowed a three-day permit to give birth and recover. When the permit runs out the mothers must return to the West Bank or Gaza. If their newborns are too tiny or not well enough to go too, mothers must leave them at the hospital.

Worse still, doctors told us how mothers cannot get permits to visit babies after they have been forced to leave them in the hospital. Even collecting babies when they are fully recovered is difficult – permits to do so are often delayed by months. One of the babies we saw there had been well enough to be collected four months ago, but the Israeli authorities had denied the necessary collection permit to his mother. This, we were told, is common.

The dehumanising impact of this is deep and profound – mothers and babies denied the chance of bonding, of breastfeeding, of the basic skin to skin contact all babies and new mothers need. Unsurprisingly many mothers of children in Makassed hospital develop debilitating post-natal depression. The developmental damage to children is likely to be equally serious.

Later in the week, we met with Breaking the Silence – an organisation of veteran soldiers who have served in the Israeli military since the start of the Second Intifada. Their work aims to bring about the end of the occupation because of the harm they believe it causes to both Israelis and Palestinians.

Joel, an Israeli military veteran, explained that as a soldier he oversaw the permit application process which every Palestinian requesting to enter Israel or East Jerusalem has to undergo, including for childbirth and other urgent hospital treatment. He said the permit regime was extremely restrictive, often only allowing Palestinians into Israel for the bare minimum amount of time necessary.

This system results in situations like the one we saw in the neonatal unit at Makassed. Joel told us that, in other cases, applicants who meet all of the criteria for receiving a permit could be denied by the Shin Bet, Israel’s internal security service, for posing a ‘security threat’. That ‘threat’ was often vague or undisclosed, but it could be something as trivial as being related to someone who had been accused of throwing stones.

It is a system in which most people are presumed more likely to represent a security threat than not. Joel also said that the general attitude among many in his unit was to regard the very idea of allowing Palestinians to travel for medical treatment as extremely generous. It hardly needs to be said that there is nothing generous, let alone humane, about babies lying alone in wards like orphans, merely for the sake of a piece of paper.

As shadow minister for the Middle East, I will be speaking at the highest possible levels about mothers and babies separated by the strictures of the occupation. I was heartened during the delegation to secure assurances from the Meretz politician Mossi Raz that he will raise cases with his colleagues in the Knesset.

However, to secure a path to peace, I believe we must ultimately look to systemic change rather than piecemeal improvements. It is important that we do not shy away from naming the occupation as an obstacle to peace. We will continue to oppose illegal settlements, evictions and demolitions which make peace harder to achieve. We must be robust in asserting international law and defending human rights. The citizens of Palestine and Israel, who desire to live in peace, side by side, deserve nothing less. 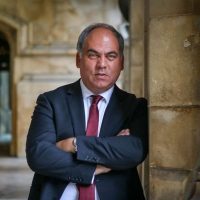 Bambos Charalambous is MP for Enfield Southgate and shadow minister for the Middle East and North Africa.