Albert Einstein is often credited with defining a fool as “someone who does the same thing over and over again expecting different results”. Whoever coined the phrase, they could hardly have produced a better description of Labour leaders’ history of pandering to anti-immigration sentiment. And now Keir Starmer threatens to repeat these mistakes as he makes a spectacle of (again) ditching his pledge to restore free movement with Europe.

Labour Party and union leaders’ history with anti-immigration policy is long. We could start the story in the 1890s, even before the consolidation of Labour as a formal party, with the TUC campaign backing the Tories’ antisemitic push for what would later become the Aliens Act 1905 – Britain’s first modern anti-migrant legislation, targeting Jews who fled poverty and Tsarist persecution.

Even after the the Holocaust, Clement Attlee’s Labour government continued Winston Churchill’s policy limiting entry for Jewish refugees – even as it admitted former Waffen-SS fighters. With the 1968 Commonwealth Immigration Act, aimed against Kenyan Asians, Wilson’s Labour ushered in what Kenan Malik called “perhaps the most nakedly racist piece of [postwar] legislation”. Tony Blair and David Blunkett introduced indefinite detention and oversaw a dramatic expansion of immigration detention, while inciting intense hostility toward refugees.

During the Brexit referendum, Labour’s official campaign led by Alan Johnson could not bring itself to make the case for free movement. In the months after the vote, embracing more curbs against immigrants was the knee-jerk response of prominent figures including Stephen Kinnock, Chuka Umunna, Len McCluskey and Keir Starmer. Finally, even long-time defender of migrants’ rights Jeremy Corbyn crumbled under this pressure and threw free movement under the bus in 2017.

Despite this, pundits can be regularly found complaining that the party has ‘silenced’ criticism of immigration and failed to listen to legitimate concerns. But what has the real result been, after more than a century of toadying to xenophobia?

Firstly, UK immigration policy has become increasingly inhumane, unleashing an apparatus of repression that, from the Windrush scandal to the systematic disbelief of asylum seekers, is defined by structural racism. The price – paid in human lives, suffering and division – has been heavy.

Secondly, because Labour and union leaders tolerated – even propagated – right-wing lies when they should have been debunking them, these lies have been allowed to spread and fester, particularly the false myth that immigration undercuts wages.

Thirdly, none of these anti-immigration policies and postures have improved wages, conditions or unemployment for British-born workers. On the contrary, restrictions on migrants undermine us all. When one section of the workforce is rendered more precarious and denied equal access to the social safety net, and when suspicion and resentment is incited between groups of workers, our collective ability to face down exploitative bosses is damaged – sometimes catastrophically.

Fourthly, despite a century of pandering to anti-immigrant sentiment, Labour is perpetually viewed as a ‘soft touch’. It cannot convincingly out-Tory the Tories. Labour’s concessions to xenophobia never succeed in sustainably capturing British politics’ vaunted ‘centre ground’. Instead, they’ve allowed the centre to be dragged rightwards – aiding and abetting the rise of UKIP, Nigel Farage, Theresa May and now Boris Johnson.

In this context, Starmer’s disavowal of free movement, and the news that his team is now considering an attack on migrants’ rights policies at the next party conference, must be understood on two levels. Both as a betrayal of human decency and internationalist principle, and as an act of self-sabotage that can only help the right to further entrench itself and its xenophobia.

At Labour’s 2019 conference, members and trade unionists endorsed a transformative alternative, in the form of a policy drafted by the Labour Campaign for Free Movement (LCFM). The conference near-unanimously voted for Labour to defend and extend free movement; close all detention centres; reunite families separated by borders; end “no recourse to public funds”; end the hostile environment; extend voting rights to everyone living in the UK; and reject any immigration system that excludes people based on incomes, utility to employers, or caps and targets.

This was an opportunity for the party to try something different by combatting scapegoating with real solutions to social problems: public funding for decent jobs, homes, services and social security and repealing anti-union laws to help workers come together and win better pay and conditions. Equipped to debunk the right’s myths, and armed with genuinely transformative answers to the problems that ever-tighter borders could never solve, Labour could have sent its mass membership to win over hearts and minds in neighbourhoods and workplaces across the country.

It might even have found itself pushing at an open door – when you actually explain what free movement is, both Remainers and Leavers embrace it. But Labour’s leading team bottled it and attempted to speak out of both sides of their mouths. Predictably, this convinced neither side.

Yet the party’s grassroots continued to hold open the door for an alternative. In 2020, they elected Starmer as Labour leader on pledges to extend voting rights, close detention centres and restore free movement. In 2021, we reconvened at party conference and voted for another raft of pro-migrants’ rights policies, including to open safe routes for refugees; end the ban on asylum seekers working; create an easy path to legal permanent residence; and oppose the Borders Bill.

Starmer’s leadership still has the chance to grasp the opportunity handed to it by Labour members and unions. It could argue persuasively that the rich and powerful, not immigration, are to blame for stagnating wages, rip-off rents and crumbling services. It could set out a plan to tear down the hostile environment and detention centres, halt raids and deportations, re-enter the European free movement zone, and extend free movement beyond Europe, for instance by negotiating to put it in new trade deals. That is what LCFM’s new motion to Labour’s party conference this year proposes.

We don’t have to wait for a general election. Labour councils can refuse to implement hostile environment measures or to invite immigration enforcement into local services. Local party groups can join community actions that have successfully blocked deportations, from Glasgow to Peckham. Starmer’s team could champion the migrant and British-born workers together showing the real way to win better pay and dignity at work: from Sheffield’s Just Eat couriers waging the longest strike in gig economy history, to the Great Ormond Street Hospital security guards battling for equal maternity rights and decent sick pay to beat Covid. A joined-up campaign like this would simultaneously transform tens of thousands of lives while winning hearts and minds in preparation for the next election – whenever it comes.

So, we issue this call to Starmer and his team: don’t go down the same old dead-end path. Instead, embrace the transformative alternative to which Labour and union grassroots have opened the way. If the Labour leadership does attempt to drag us yet again into pandering and self-sabotage, it will be down to the grassroots at Labour’s party conference in 2022 to stop them. Passing LCFM’s motion, which has been endorsed by Momentum, is our chance to do so. And LCFM’s own national gathering next month will be a chance to build the campaign across Labour and our trade unions. The grassroots will hold the line, once more, for internationalism and migrants’ rights.

Ana Oppenheim is an organiser for the Labour Campaign for Free Movement. 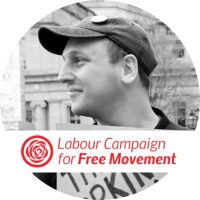 Ben Tausz is an organiser for the Labour Campaign for Free Movement.

View all articles by Ben Tausz