Whilst households are hit with stagnant wages and inflation, the City of London is dishing out big bonuses again and ramping up pay. Well, they do have a reason to celebrate; the onshoring of financial services regulation post-Brexit is giving them the chance to push a deregulatory agenda and reintroduce the ‘competitiveness’ objective to regulators. We only have to turn the clock back 14 years to see what a ‘competitiveness’ finance sector objective does to our economy and, in the words of Andrew Bailey (the then CEO of the Financial Conduct Authority and now governor of the Bank of England): “It didn’t end well, for anyone.” Think collateralised debt obligations, money laundering and excessive risk taking.

Despite the warnings about this move from regulators, the Treasury select committee and civil society – Labour has been supportive, with Shadow Chancellor Rachel Reeves stating that she was in favour of the competitiveness objective at City UK’s conference. And Jonathan Reynolds, the Shadow Business Secretary, has supported the insurance sector’s drive to use the onshoring of EU regulation like Solvency II as an opportunity to slash the amount of capital insurers have to hold, allowing them to increase their profits. Again this perspective is at odds with the regulators, the Financial Times and others who want a more balanced approach that doesn’t allow for so much risk taking with other people’s money.

It’s important to remember that the last financial crash led to Labour’s 2010 defeat. When I was doorknocking in the 2019 election, I was surprised by how many felt that they couldn’t trust Labour because of the 2008 crash. We already have an incredibly fragile economy with consumer credit at a 17-year high as low-income households get deeper into debt just to cover the essentials. This will only get worse if energy costs continue to rise as only one in ten households have any disposable income. If financial institutions are allowed to pile ever more expensive debt onto struggling households and small businesses, we will see a wave of insolvencies, potentially a deep and long-lasting recession that exacerbates inequality and more and more families going cold and hungry.

It should be a warning sign to Labour that the regulators are not happy about the City pushing its agenda so aggressively. Last week, senior executives in the City were furiously briefing against regulators, deploring them for essentially doing their job, saying things like “the slowness and caution are not helping the industry at all”.

Clearly, any industry going on an offensive to attack their regulators in the press should be treated with caution. But finance lobbyists are well practiced at developing false narratives, usually about their industries’ importance: banks claimed to be helping vulnerable customers by keeping branches open during the pandemic, while simultaneously undertaking the biggest bank closure scheme ever; they present themselves as the solution to environmental breakdown, while continuing to pour tens of billions of pounds into fossil fuels; they claim they provide investment which creates jobs across the country but in reality less than 5% of bank lending is to small- and medium-sized businesses, and they have a track record of pushing small businesses into insolvency.

When Labour gets into power, the Treasury will be inundated with big finance lobbyists pushing their agenda with myths about their own importance. The finance sector is by far the most powerful interest group in the UK with direct financial ties, lobbying access and the revolving door it maintains with the public sector. Close to a third of Treasury minister meetings are with financial institutions and their lobbyists, which is far more than any other industry or interest group. Every single Chancellor of the Exchequer in the past 40 years has taken on a private finance role after leaving office.

In order to truly level up, finance the green transition and address the country’s economic inequality we need finance to reach all regions and communities. That simply can’t and won’t be done by the current big banks, especially with watered down regulation. In the pandemic, despite the government’s efforts to support small businesses through the big banks, excessive interest rates and unreasonable lending criteria meant the initial loan scheme (CBILS) was a failure. Small- and medium-sized businesses account for 60% of private sector employment, yet they are totally underserved by the current banking system.

Evidence shows that when countries have more stakeholder banks they do better. Germany has a network of public savings banks, called the Sparkassan, which is supported by a national investment bank (KfW). The country also has a huge number of co-operative banks. We require new institutions to deliver finance to where it is needed, and relying on the too-big-to-fail banks and deregulated insurance companies is misguided. Those new institutions are starting to appear from South West Mutual, to Banc Cambria, supported by the Welsh government. But they face challenges from a regulatory system designed for big banks, which could only get worse in the face of regulators panicking about risk in the system.

There are some in Labour who may think we could deliver both; give the City of London what it wants, alongside a revived community banking model. But a deregulated banking sector will continually undermine an economic strategy that seeks to address the real challenges of the day: climate change, inequality and democracy. It would end up with a rerun of the 2008 financial crash, but this time the stakes are even higher. 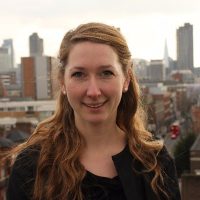 Fran Boait is the executive director of Positive Money.

View all articles by Fran Boait