The power of Labour in local government brought us a successful Commonwealth Games for the UK – a fact often not celebrated enough by ourselves and something the Tories want to overlook. Because of Labour in Brum, we welcomed visitors from all over the globe to our bustling and growing economy. In times of national opposition, I can’t express my pride in being part of an administration that works to improve life in the face of Conservative cruelty. And that’s what it is. Let’s call a spade a spade – it is cruelty, corruption and callousness from the Conservatives. Whilst they parade around fighting amongst themselves, we’ve got a Labour Party united behind Keir Starmer’s leadership and powerful, meaningful, life-changing decisions taken by Labour in power in local government.

I was lucky enough to be able to attend The Commonwealth Games opening ceremony. Halfway through, full of goosebumps and pride, I solemnly declared to my partner that the spectacle before us was my politics; I saw diversity, pride, confidence, braveness, care and compassion, and a fight to expect and demand better before my eyes. I was buzzing from the spectacle before me, and the feeling around Birmingham in the days following was something I’d never felt in the city I grew up in.

Now, my partner is a man, and we were hosting countries that still criminalise and punish people like me. Birmingham didn’t stand for simply ignoring that; Pride House was launched and provided a haven for LGBT+ athletes, spectators and local people alike. It was a place to learn, meet with friends and allies, and feel safe from a world that is still unfriendly to us and, for many of us, increasingly dangerous. West Midlands Police received the fourth highest reports of transphobic hate crime in the past year, and in the past five years has seen homophobic hate crime rise. This place was needed and an absolute necessity for us to receive the honour of hosting these games.

The Commonwealth Games were played down and even ridiculed by some people. In Birmingham, criticism was high for years before the ‘friendly games’ but, once it arrived, local people loved the atmosphere, the free local events and the festival feel around the city.

I chair the scrutiny committee in Birmingham, responsible for scrutinising the legacy of the Commonwealth Games. Regardless of your thoughts on the games, I’ve told council colleagues that it is our responsibility to ensure that we make this legacy work for the residents we serve. Already, we see positive action through the provision of sports equipment being donated to groups all around the region. Birmingham 2022 was the first games where more medals were available to women than than men and where more medals were available for parasports than ever before. We must ensure that legacy means something in the long term to increase engagement in sport and physical activity across marginalised groups.

We’re launching an inquiry soon on disabled access to sport. I’ll be working, cross party, with colleagues to assess the provision of sport for disabled people across our city in the wake of the Commonwealth Games. One disabled colleague told me angrily that there was “nothing for disabled people in sport” in this city. For many disabled people in Birmingham that is, without a doubt, true. It’s criminal that in 2022 there is so much to do to ensure that disabled people can access something life-changing.

Whilst often sporadic in my life, physical activity has sustained me – particularly in politics. It’s a distraction from the rest of life. It helps ease our mental woes, increase our physical capabilities and enables us to feel like life is just that little bit easier. In times of difficulty and strife, I often turn to physical activity. For many, it’s a saviour.

In the Labour Party nationally, we have a leader passionate about sport. Keir attended The Commonwealth Games opening ceremony and is a keen football player. I’m confident that, under Keir’s leadership, we can bring about a sea change when it comes to sport in our local communities. Until that Labour government is elected, I and others like me Labour’s local government family will be working hard to try and deliver life-changing opportunities for people across this country who need access to sport.

I want other people to feel the benefits of activity that I often feel. If I am to achieve anything in my capacity as a councillor, I want to make it easier for at least one disabled person to access sport through our work in this inquiry. 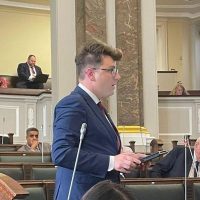 Jack Deakin is a Labour and Co-operative Party councillor in Birmingham.

View all articles by Jack Deakin