I am Anas Dayeh, I’m 20 and my pronouns are he/him. I’m running to be your chair of the National Labour Students committee because I want to build an open and welcoming student wing.

For a long time, I felt embarrassed to share my story. I never told anyone at sixth form that I was in care, and I only just recently started feeling more comfortable sharing that part of my life. After arriving in the UK with no GCSEs, I was rejected from most sixth form colleges in London. My ability to achieve or get to university was constantly doubted. By the end of my time at college, however, I was the first and only person to achieve A* in A level politics since 2015.

The need to have a system that isn’t rigid and linear has never been more profound or needed. I proved the sixth form colleges wrong and fought against their biases, but this shouldn’t have been the case. It is absolutely clear to me that if people were given the opportunity, they can flourish – something that our education system lacks.

That’s why I’m running to be your next chair of Labour Students. We need a student wing to help build progressive educational policies for the Labour Party, and to tackle the issues that our students face. Issues that the current Conservative government doesn’t care a tiny bit about.

For that, it’s important that Labour Students builds positive and supportive networks between all of our Labour clubs – all across our regions and nations. I have been proud to bring together several University Labour clubs at events and in campaigning sessions across the country. This would be at the heart of my work as your chair – making sure that we’re working as one student movement, developing skills and learning from one another’s campaigning successes.

While I was on Universal Credit, a system that failed many in our country, I was studying atsixth form from 9am to 5pm, and working from 6pm to 11pm. Even transport – where a weekly bus pass costs £18 – made up ⅓ of the weekly allowance for a care leaver. Now at university, my university’s low-income grant might have slightly improved my financial situation – but it absolutely breaks my heart knowing that there are young people out there who are living in the same circumstances, with no one to help them.

As a British Palestinian, I know the harms that come from the Tories’ hostile environment all too well. As the Conservative leadership candidates try to out right wing each other, minorities will be on the frontline of their rhetoric. I remember when I first came to Britain in 2018, I had no family or friends here, and had to figure out what to do by myself. There was a moment where, as a result of Tory policy, I had to fight the social services and the Home Office; although being a British citizen, they threatened to deport me or leave me on the street. Looking back at it all I can think about is that no one, regardless of their citizenship, should’ve gone through that.

The Tories are focused on whipping up a culture war to deflect from their failings on the cost of living crisis – that we know will only lead to further racism, transphobia and homophobia. Having faced homophobia from within my own community, I know how harmful further division is to being true to who we are.

I want to build a Labour Students that is strong on the issues that matter to us. Whether that’s the Tories’ economic catastrophe, campaigning for climate justice, taking on exploitative student landlords, to building a safer party for our trans and non-binary siblings. We must also make sure our new wing actively listens to the voices of Jewish and Muslim members if we want to build an organisation that is a truly safe space for all.

The Conservative government has been happy to throw money around when it will benefit big businesses, but are tight-fisted when it comes to helping the working classes in the worst cost-of-living crisis for decades. We need a Labour Students that helps build a serious organising network, and gets students involved with campaigning to help achieve a Labour government at the next General Election. Because after all, when Labour wins, students win.

We know that Labour in power works, and with me as your chair, we will build a Labour Students fully focused on getting there. In my time in the UK, we have never been closer to that Labour government than we are now. As your chair of Labour Students, I’ll fight every day to get it. For you, me, and every person out there who desperately needs us. 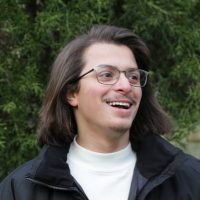 Anas Dayeh is standing to be chair of the National Labour Students committee.

View all articles by Anas Dayeh