Britain has so much potential – but it’s being wasted. Our economy is in turmoil. Under the Tories, thousands of people will pay higher mortgage bills for years to come, on top of soaring food prices and energy bills.

The Conservatives keep peddling the idea that this is all down to ‘global issues’ – but Britain has been hit harder than other countries. Our public services have been decimated. We’re lagging behind on the global stage after 12 years of Tory rule – more than a decade of wasted opportunities, recklessness and mistakes. Growth is low, productivity is down, inequality is far higher.

Our mission must be to make our economy stronger. If we don’t do that now, working people will feel even more pain. Families across our country will pay the price. If Labour was giving the autumn statement on Thursday, we’d be focused on two things.

First, we would be making fairer choices for working people. For too long you’ve carried the tax burden in Britain. It seems every time taxes go up, it falls on you. We’d do everything within our power to avoid that happening on Thursday. That means a proper windfall tax on energy producers making eye-watering profits. These profits are a windfall of war and should go towards footing the bill for this crisis. We’d scrap unfair tax loopholes like non-dom status and tax breaks for private equity bosses.

And we’d move quickly on the global pact to tackle tax dodging by big multinationals, bringing in up to £7bn to the UK’s public finances and making sure global giants using tax havens don’t get out of paying their fair share here. Britain taking global leadership on that pact isn’t just the right thing to do for our public finances. It’s also right for British businesses who pay their fair share in taxes but are constantly undercut by those multinationals who don’t.

These are straightforward, fairer choices we’d make on Thursday. But with so much potential, we’d make sure Britain’s economy is not just secure, but growing strongly too. That’s why the other thing we’d prioritise is a real plan to grow our economy. Through our plan, Labour would unleash the efforts and talents of millions of working people and thousands of ordinary businesses that make our country so great.

At the heart of that is our promise to invest in good jobs in British industries through our green prosperity plan. From the builders and plumbers needed to insulate homes, to engineers and operators for new nuclear power and windfarms, our plan will help us lead the pack. Our start-up review will untangle the problems holding new firms back, and help us make Britain the best place to start and grow a business. And our mission to fix business rates will get our high streets thriving again. 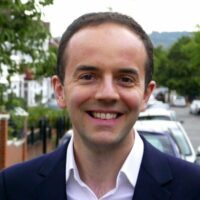 James Murray is the Labour MP for Ealing North and shadow economic secretary.