It isn’t every day that you get told off by a Prime Minister for waking their baby with your booming voice. Embarrassingly, that’s exactly what happened to me when I met New Zealand’s Jacinda Ardern in late 2018. The very fact that Ardern brought her daughter Neve, then barely five months old, into work with her every day was emblematic of the generational and cultural change her election represented. That change echoed far beyond the shores of Aotearoa, Ardern’s use of the Māori name for her country another example of the fresh start her premiership promised.

It was that fresh start that drew me and a group of other British and European progressive political strategists to Wellington to try and discover the story behind Ardern’s extraordinary turnaround of her party’s fortunes. Following the shock announcement that she will stand down as Prime Minister, it is time for UK Labour to learn the lessons, not just from her electoral triumphs, but from her near six years of hard slog in power.

Any assessment of Ardern in office must start with an acknowledgment of the success of her personal brand. It was quite simply transformative. Interestingly, the party leadership came Ardern’s way after another resignation in the run-up to an election. The incumbent opposition leader, Andrew Little, was deeply unpopular, and Labour was in danger of crashing to fourth place in the 2017 election. Realising he was about to lead his party into the abyss, Little resigned, and within hours, Ardern was crowned his successor.

With weeks to go before polling day, Ardern realised optimism was her best weapon. Through force of personality, she single-handedly repositioned Labour from a party that seemed to be against everything to one that seemed in tune with New Zealand’s future. With no time to change policy, it was all about rewriting the narrative. The three-word slogan ‘Let’s Do This’ did just that. And do it they did, coming a good second in terms of seats and crucially, via Ardern’s charm and openness, securing the partners needed to form a coalition government. Then came the difficult part.

Much of the early popularity of the Ardern administration was achieved by getting the tone right. Her dignified, heartfelt response to the fatal Christchurch shootings won worldwide plaudits and sealed her status as an instinctively empathetic leader. And when the pandemic came, the decision to lock down hard and early saw New Zealand avoid the levels of Covid deaths seen in most countries, including the UK.

Ardern was seen as a decisive leader in tune with her country. To my mind, the only comparison in British terms would be Nicola Sturgeon. Like SNP supporters, those swept along in Jacindamania saw their hero as the embodiment of their country’s distinct progressive values and a welcome contrast to the pale, male and stale leaders of their nearest neighbours. Ardern followed the SNP precedent by winning an overall majority in a proportional representation system designed to avoid any one party doing just that.

The lesson for UK Labour from the first Ardern term is clear: tone matters. Owning the narrative can make more difference than detailed policy proposals. Finding the right language, sending the right signals and seeming in step with the national mood can secure victory. Polls might suggest that Britain believes Keir Starmer would be a safe pair of hands in Downing Street, but even those close to him would agree that more could be done to capture the national imagination.

The second lesson for UK Labour comes from Ardern’s second term. You can set the national mood, but you also have to deliver on the nation’s priorities. Burnishing liberal credentials may make you a hero with radicals across the globe, but it can start to grate with voters at home. Especially if it comes to be seen as virtue signalling at the expense of delivering on the nuts-and-bolts voters expect a Labour government to deliver.

On several key measures, the Ardern government talked a good game – and few can talk as eloquently and compassionately as Ardern – but failed to find a winning formula. Reducing child poverty was her avowed reason for being in politics, but it flatlined. Sorting the country’s acute shortage of affordable housing was one of the causes that saw Labour attract younger, aspirant voters. But the KiwiBuild scheme to build new homes became a national joke. Pledging to build 100,000 homes over a decade, after five years, Labour has delivered barely a thousand. Ardern’s government found nearly $700m to help businesses decarbonise, but it failed to find a similar amount to deliver the long-held Labour goal of free dentistry.

Adding in a determination to keep the country’s borders closed almost as long as China in response to Covid, it is perhaps no surprise that Kiwi Labour’s poll numbers have been heading south for much of the past 12 months. Ardern has remained preferred Prime Minister, but the opposition National Party has been showing a consistent lead. Just as her predecessor won admiration for knowing that he wasn’t the leader to win an election, Ardern could be congratulated for sensing that her party needed a reset.

Ardern will go down in history for showing that you can be a different kind of leader. In going, she has remained true to herself, not trying to fit into a restrictive male-set template. As she said in her resignation statement: “I hope I leave New Zealanders with a belief that you can be kind but strong, empathetic but decisive, optimistic but focused. And that you can be your own kind of leader, one who knows when it’s time to go.”

It’s often said that New Zealand can feel more British than Britain. Spend five minutes in the iconic Beehive building in Wellington that houses ministers’ offices and you will be struck by the number of British accents heard and ex-UK Labour staffers spotted working away. As Westminster MPs tweet deserved praise for Ardern’s premiership, they shouldn’t lose sight of the fact that, ultimately, Labour here like Labour there will be judged not just by what it stands for but by what it manages to achieve. 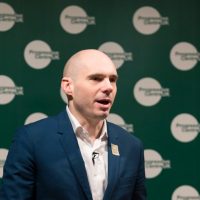 Matthew Laza was director of the international progressive think tank Policy Network and a senior adviser to Ed Miliband MP while he was Labour leader.

View all articles by Matthew Laza