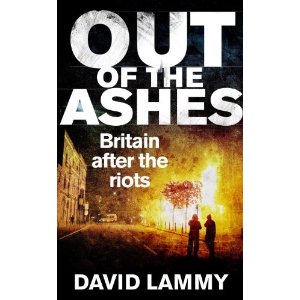 Riots very rarely cause political change, but they often indicate that something of great political significance is about to happen. That was true in the early 1980s, when Brixton and Toxteth exploded just as the Thatcher revolution got under way. David Lammy’s brilliant new book, Out of the Ashes: Britain after the riots (Guardian Books) demonstrates it will be the case this time too. The key question, of course, is precisely what kind of change did this summer’s riots presage?

David Lammy knows what he wants the answer to be. He wants to see a Britain where people are more respectful of each other, where government trusts people to run their own lives and where people respond to that trust by constructing communities of value, places where they look out for each other. He wants to see a Britain where responsibility, character and morality are the watchwords of our daily interactions and where politicians realise that not every problem needs a legislative solution.

Lammy recognizes that our country is already like that at times. In Out of Ashes, he tells beautiful stories of institutions such as the London Boxing Academy (LBA) in his own constituency of Tottenham. The LBA, Lammy reports, is a community project where kids are provided with “structure and discipline alongside relationships that are warm and caring.” Although much of the time that young boys spend at the LBA is taken up with lessons, both physical and mental, staff always aim to do far more than impart knowledge or develop technique. As Lammy puts it, “the LBA invests in people’s souls as well as their skills.”

Yet something has stopped tough, supportive and socially-rooted institutions like the LBA from truly characterizing the last few decades. For some reason, the LBA is the exception rather than the rule. David Lammy thinks he knows why. The blame, he insists, lies with two ethics, both of which developed during the last few decades of the twentieth century, and both of which stand squarely at odds with the kinds of investment of time and energy that initiatives such as the LBA requires.

The first of these ethics is the ethic of individualized concern. Encouraged both by the sixties “rights revolution” and the Thatcher year’s emphasis on consumerism and material gain, this instructs people that they are right to look after their own interests first, to prioritize their own immediate desires over the expectations of others, however socially important those expectations might be. Lammy shows how it even became commonplace in the 1990s and early 2000s to insist that such an ethic was somehow “natural”, that human being did not possess the altruistic capacities necessary to look after each other, that rationality itself was shaped by self-interest.

The second ethic that Lammy detects is an ethic of entitlement. Not only do people believe that they are right to look after their own interests, but they paradoxically expect other people to look after their interests too. The demands on parents, on teachers, on doctors, and on government thus expanded exponentially, as people learnt to insist on their “rights” and to condemn those who failed to serve them as they expected. Again paradoxically, politicians from all sides were complicit in encouraging this second ethic. It was almost as if they knew that the culture of expectation and blame that it generated offers a rationale for ever more meddlesome intervention. We need to legislate, the government can insist, because people expect us to do so. And before Britain knew it, we had governments that had lost trust in the ability of ordinary people to live their own everyday lives and thought that its action was required everywhere.

The consequence of these two ethics is a society where the demands on government are always greater than government is capable of meeting, where people feel constantly disempowered because they are trusted neither by the authorities nor by their neighbours, and where people have low social expectations of each other but excessively high material expectations for themselves. A society like that is a society ready to explode. It is a society where disappointment, dislocation, and disaffection threaten to become the overriding experiences of everyday life.

This is the picture Lammy paints and it is astonishingly vivid. Out of the Ashes may appear overly bleak at times. But it is brilliant. And Lammy is surely right when he says that Britain cannot go on like this. We all need, boldly and publically, to say that it is not right to expect things of others than we will not deliver ourselves. That it is right to try to look out for one another, to try to build a community of purpose in the neighbourhoods in which we live and the workplaces in which we labour. We all need to stop celebrating the ethics of individualized irresponsibility and to turn the ethic of social responsibility instead.

Whether we will really try to do this, and how it will come about if we do, is, of course, the remaining issue. Lammy’s book contains some intriguing suggestions. He has ideas for business practice, for social renewal in inner city neighbourhoods, and recommendations for policy when the time comes again for a Labour government. He makes a powerful and convincing call for democratic renewal. But, for me, it is not these individual recommendations that make the book special. It is the fact that a major politician, with an impressive career and aspirations for the future, has been able to present this argument at all. That shows, more than anything else, that Britain is ready for this debate. We are ready to ask how we can become more mutually supportive and socially responsible. And that means we are ready to enter a period of profound social and political change.

Out of the Ashes: Britain after the riots is out now – buy it here.

Marc Stears is a lecturer in Political Theory and Director of the Centre for Political Ideologies at Oxford University, and the author of Demanding Democracy: American Radicals in Search of a New Politics.

View all articles by Marc Stears