Shadow cabinet meeting in Bromley for first time and Bromley girl Rachel Reeves had some of us up at the crack of dawn to leaflet at Bromley South station. Ivan Lewis, Vernon Coaker, Emily Thornberry and I made the 0707 train with coffees provided by Rachel. Stephen Twigg sent apologies for running late but his train had been made a crime scene and wasn’t moving. Up there with the great “I don’t want to come out and campaign” excuses of all time, but actually true. He caught up with us later.

At Bromley South, we handed out leaflets to those going into London for work. There are some wealthy streets and large houses and no doubt self made business people who may think voting Labour doesn’t sit comfortably with their status in Bromley. But at Bromley South I met ordinary people, hardworking, who don’t define themselves as well off. A generation or two before were probably seen as working class. Many moved to outer London for cheaper housing to buy and the chance to better themselves. In parts of the North and elsewhere many of these voters would be Labour. We have to ask ourselves: “why not here and in other parts of the South?”

Interesting fact: famous Labour people from Bromley include H.G.Wells for whom the Bromley Labour Party HQ 7 Social Club is named after.

Later that day I was in Thurrock which we lost by 92 votes at the last election. We lost, the Tories didn’t win. Our PPC Polly Billington has built up a revived campaign team of members and candidates, including a lot of women from what I could see on the day. They are determined to regain the trust and support of Thurrock voters. With red balloons outside Benyon Primary School in Ockendon, we were very popular. Nothing beats a balloon to start a conversation with parents of young children. There’s something rather lovely that, in this materialist world we live in, balloons still have a timeless appeal. Lots of talk about changes to tax credits for working parents. 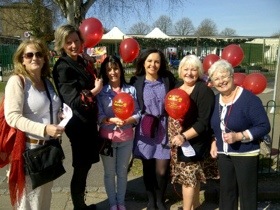 Later, I do a digital interview with YourThurrock where we cover the Budget, Granny tax, jobs and climate change. These interviews are good to do, but there is always a danger that you do or say something and suddenly what was a local interview goes viral on YouTube. That didn’t happen today.

Since covering the energy brief I have become more sensitised to looking out for anything that is linked. Solar panels are a prime example and Ockendon does not disappoint – on homes and the local academy they are shining beacons to people power taking control of their energy supply.

Knocking on doors in the daytime the number of “outs” suggested a community still at work. Of course, we have to get people who are unemployed into work, but we also have to be alive to the concerns and insecurities of working people too. Many I met were worried that their children would not have the same opportunities and chance to earn a living as they did.

One mum I met had recently been made redundant. She was doing what she could to find work but felt immigration was a problem for British people trying to find work. I asked her why. At the Jobcentre she attends she sees language services for those who speak little or no English. “With money tight why are we paying out for this? If people want to work it’s their responsibility to learn English.” She apologised to me if she sounded racist. She echoed different but similar concerns raised by people recently made unemployed in my own constituency. The stories they’ve told me – of people leaving open cans of lager on the doorstep of the job centre before they sign on at 9am, and people bantering with friends about cash-in-hand work they are off to later – might not be representative, but we have to understand why they make people so angry.

Another woman I met thought that although Labour had done more than the Tories to support carers, it still wasn’t enough. She had given the best of her working years to caring for her mother. Since she passed away, the financial support she once got was no longer available, and she couldn’t find a way back into work. She couldn’t understand why people like her, who had done the right thing, had to struggle, while money was still being spent to support overseas development. This was a woman who keeps up with current affairs, likes watching Question Time and wouldn’t vote Conservative. She was instinctively Labour, but felt we should have done more for people like her.

Although Bromley is in London, and Thurrock is in Eastern region, the messages I got at the train station and on the doorstep echoed what I’d heard so far in the south-east. Thinking back, what all the people I met were really talking about was fairness. Too often in Government, when we talked about fairness, we were actually talking about need. Of course, a fair and decent society must always protect the least well-off. But for the people I met in Thurrock, Bromley and in my own constituency, fairness is as much about exchange – taking out once you have put in – as it is about need. They want fairness for “my family as well”.

We have to show we get what the public mean by fairness, and why issues like immigration, abuse of the welfare system, and even overseas aid come up in the way they do on the doorstep, even when we know they’re not to blame for the lack of jobs and growth. We politicians always see and reflect things on a macro level and will provide reasoned and rational arguments about why something happens in the way it does. In doing so, we comfort ourselves and sometimes delude ourselves. But most voters don’t see things like that. They see politics through the media and their everyday experiences. Too often have I met voters whose support for a political party was ruined by an encounter with a Government agency or council department. Unfair though it may be for political parties to be held to account because of the “computer says no attitude” of an official, we need to be in touch with those everyday incidents and be as interested in them as much as the big number stuff.

Any MP worth their salt will know what I am talking about. They go into bat for their constituents with a few staff up against organisations both public and private with thousands of staff and budgets to match. MPs have deserved a lot of their bad press in recent years but it shouldn’t cloud the real service they provide when no one else will listen. Some MPs and others say we shouldn’t do this work and stick to the national not local. But it is one of the most powerful, unwritten, strengths of our parliamentary system. The insight it provides and the connection between decisions in Whitehall and delivery in neighbourhoods should keep us grounded.

The same goes for Councillors – out of the Town Hall and into the shopping mall. Thurrock’s Labour Team is doing just that and what they and others hear is important for Labour nationally.