St George’s Day seldom goes by without some features editor asking me to compile a list of things that define Englishness. It’s a pointless task. Top of my list of would be a love of Marmite, yet such a choice would immediately rule out half the population of England.

The simple truth is that nations cannot be defined by character alone. It’s those things that we possess that other nations do not that truly define us: our society, our geography, our institutions and our traditions.

Tradition doesn’t inspire the politics of many progressives, but, throughout our history, those who have sought to create a fairer society have often couched their arguments in terms of traditional values quite unlike those espoused by the Conservatives.

Next year sees the 800th anniversary of the sealing of the Magna Carta, the first known attempt to hold the absolute power of medieval monarchy to account. In their negotiations with King John, the barons cited the laws of Edward the Confessor, last Saxon king of England, as a model for the fair settlement that they wished to secure for themselves.

During the English Revolution of the 1640s, the Agitator and Leveller John Lilburne evoked Magna Carta as the basis for the freedoms he sought.

Nottinghamshire Major John Cartwright wrote a pamphlet in 1776, calling for annual parliaments, equal electoral districts, payment of members and adult male suffrage – ideas that would later form the backbone of the Chartist’s demands.

Called the Father of Reform in his time, Cartwright went on to found a number of radical debating clubs named after John Hampden, a leading figure of the English Revolution. Throughout our history, English progressives have called upon tradition to help articulate their vision for a fairer society.

The radical demands of the barons at Runnymede, the Levellers at Putney and the Chartists on Clapham Common were driven by the need to seek security in a time when their lives are constantly under the threat of disruption by unaccountable power. The same struggle is to be found at the heart of Labour’s traditions.

The party was founded by people who came together in the workplace in the fight to gain job security. Labour councils built houses in the 20th century to offer working people security of tenure. Introduced in the same year as the Welfare State, Labour’s National Assistance Act 1948 abolished the workhouse, offering security in old age for all.

Most of those who voted Labour during these years were not radical revolutionaries. They supported the party because it offered them the promise of gaining some control over their day-to-day existence.

Over the past thirty years, we have witnessed a massive push back against these gains by unaccountable employers seemingly determined to undermine job security. Stagnant wages have made it more difficult for first time buyers to get onto the housing ladder. Though we live longer, the lack of pension provision in the private sector makes many anxious about the prospect of old age.

The electorate are losing faith in their ability to bring about change through the ballot box. They feel distant from the day-to-day workings of Westminster and sense that the big decisions are being made elsewhere. Meanwhile the rich and powerful resist being held to account by railing against ‘red tape’ and human rights.

The next Labour manifesto should put security at the heart of its policies: the introduction of a statutory living wage; boardroom representation for workers; a commitment to build more houses; devolution of power to the English regions.

Those who fought for parliament during the English Revolution referred to their struggle against Charles I as ‘The Good Old Cause’, drawing inspiration from our nation’s radical history.

If they hope to win the next election, Labour need to reconnect with that cause by holding to account those faceless corporations who put profits before people. Our party was founded to help ordinary citizens gain control over their lives – its time it lived up to its traditions.

This article appears as part of our St. George’s Day Special on LabourList. Keep tuned for more throughout the day. 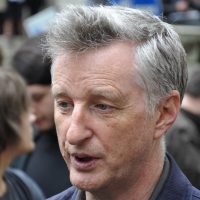 Billy Bragg is a singer-songwriter and political activist.

View all articles by Billy Bragg