Research carried out by the think-tank Demos has found that voters are more concerned with the representation of “local” voices in the House of Commons than they are with greater representation for women or working class MPs. You can read the report here.

Demos say that around 63% of MPs are local to the areas they represent, with the 73% of local Labour MPs far outstripping the 51% managed by the Tories, while the Lib Dems have the most with 82%. This means that Labour has the most local MPs in Parliament. 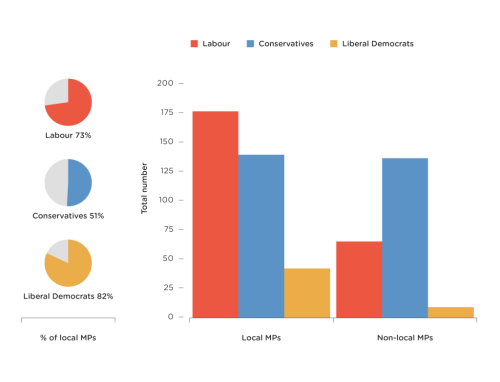 To be deemed ‘local’, MPs had to fulfil at least one of three criteria: either being born, going to primary or secondary school, or living for five years prior to seeking election in their constituency – or within 20km of it.

Interestingly, the analysis found that 67% of Labour MPs selected through an All Women Shortlist – which may go some way to dispelling criticism that they are prone to delivering “parachute” candidates. While this figure is lower than Labour’s average, it still remains higher than Parliament as a whole. This seems to indicate Labour are able to offer a greater diversity of representation in the Commons, while not forgoing the electorate’s desire for a local representative. By contrast, only 40% of women elected for the Conservatives through their party’s A-List scheme were local candidates.

However, Ralph Scott from Demos had a word of warning: “The findings raise the question of what people mean when they say ‘local’ – the rise of UKIP and other anti-establishment parties shows that people are looking for something beyond the mainstream. It’s possible that ‘local’ here means social distance: does this person understand my life?”