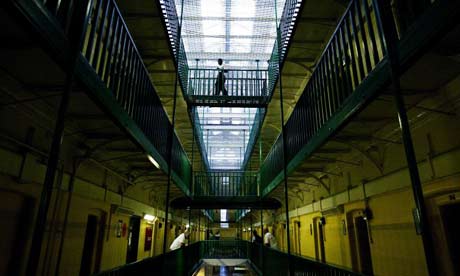 Prison A has been open since 1875, it holds just over 1200 men, in 2013 there were 81 incidents of self-harm. There are a variety of problems as with running any large institution but commenting on the last inspection in 2011 the Chief Executive of NOMS (National Offender Management Service) noted ‘…that despite a high turnover of prisoners, [the prison] was safe, with good staff-prisoner relationships and effective security measures.’It costs approx £22,0000 per person in prison, per year.

Prison B has been open since 2012, it can hold around 1600 men, in 2013 there were 611 incidents of self-harm, earlier this year there were reports of ‘significant events’ which some say were riots. Their last inspection was 2013 when Nick Hardwick, Chief Inspector of Prisons, found it ‘urgently needed to improve and there were real risks if matters were allowed to drift.’ Against all four healthy prison tests: safety, respect, activity and resettlement, the outcomes inspectors observed were either insufficient or poor. The inspection found that drug rates were more than double that in comparative jails and famously said that it is easier to get drugs than soap in this prison. It costs approx £12,000 per person per year, down from £15,500 when it first opened.

Which prison is public sector and which is run for a profit?

Which prison is the government advocating as a benchmark for other prisons to emulate and measure themselves by?

Of course, it’s Prison B, otherwise known as the G4S run HMP Oakwood and not Prison A, the public sector HMP Wormwood Scrubs. Just when you think Grayling and the MoJ had exceeded themselves with the blinding stupidity of their most recent policy, they manage to outdo themselves yet again with an even greater show of staggering idiocy. In this policy area the ideologically driven cost cutting exercise taking place is particularly terrifying because there is a huge consequence for public safety when it all starts to crumble.

Last week NOMS announced that they want prison governors to save £149 million a year. They want public sector prisons to be ‘bench-marked’ against private prisons like Oakwood, with their lower running costs. Commentators have been consistently united in their derision of what was known as HMP Jokewood, long before the prison even opened. In the early days basic things like toilet roll were not available for stretches of time; the 2013 inspection of it could not have been more damning. And yet, in Grayling’s brave new world, where it’s only about the cha-ching, cha-ching, here is yet another example of the ideals of justice, rehabilitation and humanity being casually slaughtered at the altar of profit to appease the tabloid gods’ thirst for ever-more punitive regimes. Many in the sector have long anticipated this move, seeing it as a warm up to privatising all jails, once every prison is being run at bargain basement competitive prices, making them ripe for a nice juicy shareholder dividend post sell-off.

It is sickening, backward and antithetical to sound notions of justice, but what more can you expect from this book banning, probation privatising, legal aid lacerating Lord Chancellor? Our justice system is in crisis and risks becoming a hollow misnomer, rather than the world class system built on Magna Carter’s 40th clause ‘To no one will we sell, to no one deny or delay right or justice.’ In just the last week we’ve seen a judge halting a complex fraud trial after defendants were left unrepresented because of legal aid cuts and the Joint Committee on Human Rights decry the government’s proposals to reform judicial review as incompatible with access to justice and endangering the rule of law.

There is a huge opportunity here for Labour to put some clear blue water between us and the Tories. To replicate the boldness and flair of recent housing policy pledges this time in strong commitments to rebuild our decimated justice system. We can be the party that refuses to commoditise people and rejects the prison model of warehousing the poor. If we want to save money in the long term we need justice policies that work on the same lines of Andy Burham’s whole-person health policies, that looks in forensic detail at the causes and drivers of crime, that has strategies to deal with mental health, addiction and surviving childhood neglect and abuse. The Labour justice team can plump for policy that invests money in (re)habilitation, in providing opportunities for people who have often had so few and do so in a humane environment where people matter above profit. Sadiq Khan’s recent announcement that a Labour government would scrap plans for a teenage mega-prison, a modern-day borstal, are a welcome nod in the right direction. But much more is needed to reverse Grayling’s savaging cuts, if we want to use the word ‘justice’ as a fitting description of this system in years to come.

We need to reacquaint ourselves with the core principles of justice so we can run a system and prisons that deliver it. Prisons where drugs, riots and rife self-harm aren’t excused in the name of profit. We know what works: it’s slow and it costs money, but if we want changed lives, sustained reductions in crime and justice – it’s the only choice we have.

Sara Hyde is chair of Fabian Women's Network and an Islington councillor. She is doing a PhD on the impact of prison suicide on prison healthcare staff.

View all articles by Sara Hyde