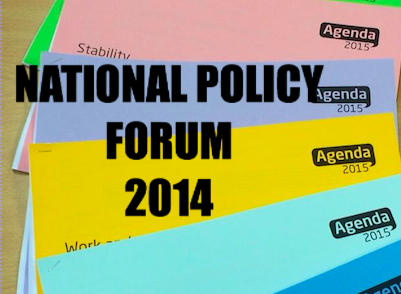 Four years ago, when I first joined the NPF, I didn’t really know what to expect. I had heard stories of course. That is was a talking shop, a stitch up, an irrelevance.

My first experiences were not good. First in Gillingham and then in Wrexham my hopes of having a constructive role to play in the policy formulating process of the Labour Party were comprehensively dashed and abandoned. Then came Birmingham. Things had changed. We had meaningful discussions. We had a sense of purpose. We had a belief that this was an important thing to do. That our time was not being wasted, but that we – as members – were going to have a say in how our policy was formulated.

Reading back my post from that time, I was sceptical that we would get things like the policy submission and discussion website. I was wrong. Your Britain has been a resounding success with something like 200,000 submissions coming to it. As a Socialist Societies representative on the Stronger Safer Communities policy commission, I was emailed every time there was a submission to our section. I got a lot of emails. It was great to read ideas from members and supporters all over the country. Many of those ideas are now encapsulated in the final documents that have come out of not just this weekend, but the continuing iterative process that came from allowing every member of the NPF to sit on a policy forum.

So by the time we came to this weekend and the so-called “Warwick process” I was feeling substantially better. But I was also wary. I knew the proof of the pudding would be in the eating. I know our party’s tendency to try to control everything from the centre. I wondered how much strong arming, bribery and blackmail would be involved in achieving consensus.

The answer was very little. Ok, I wasn’t in the negotiations on the really contentious issues – Trident, Rail etc. – only those who have submitted or seconded amendments on the issues were part of the separate processes negotiating final wording, and none of mine were on those topics (mine ranged from housing to local government finance, Research and Development in health to Science education – the joy of being a Socialist Societies representative is the breadth of topics we get to cover).

But the openness and good natured approach from the staff and the Shadow Cabinet made these negotiations easy, pleasant and most of all fruitful. More than once I was told “I want you to go away with something”. There was a genuine desire to ensure that delegates views and priorities will be reflected in our policy offer. If and when Labour get into government next year, I will be able to point at things we do and say “I did that. I played a small part in the grand collective that is our party in making that happen”.

That’s quite a humbling feeling.

That desire was reflected back to them by the delegates. This was a process that treated us like grown ups so we behaved like grown ups. The word of the weekend was consensus. That we achieved it around a programme that is both radical in its scope but also deliverable is nothing short of extraordinary. We have a blueprint now for a new Britain. A new type of society in which it is power and opportunities that are redistributed – meaning there is less need for money to be spent on interventions that happen too late. Now we need to be relentless in pitching this to the nation. It is exciting, but our challenge now is to excite others.

This was an incredibly hot weekend. Tempers could easily have frayed but they didn’t. If someone had told me when travelling home from Wrexham in 2011 I would be so excited by a National Policy Forum meeting I would have given them a few choice words. We have come so far in such a short space of time. We achieved what few thought we would back in 2010. We are a party united behind a new offer – one quite unlike anything we have had before.  That we have is testament to the incredibly hard work of Angela Eagle, Jon Cruddas and Ed Miliband and to the dozens of Party staffers who worked so hard to make this the success that it has been.

Emma Burnell is Contributing Editor of LabourList, and represents the Socialist Societies on the National Policy Forum