The Tories are going hard on trade unions and strike action today. David Cameron has renewed his promise to crack down on industrial action in next year’s manifesto, and the likes of Boris Johnson and Francis Maude have come out to back him up. But you know that they are really taking it seriously when they make a picture to share on Twitter: 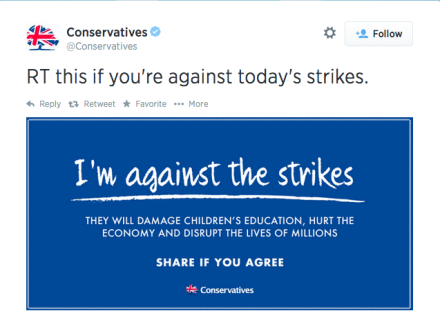 This did not exactly go viral. As I’ve already covered today, the Tories have wildly overestimated the popularity (and electoral gain) of bashing the unions – in fact, it diminishes Cameron’s chances of returning to power.

Of course, it did not take long for the good people of the internet to amend the poster. At the time of writing, it has been shared more than twice as much as the Conservatives’ original:

Another stonking success for the Tories’ social media strategy, then. Just don’t mention beer and bingo.