Lately I’ve been thinking a lot about marching. I’ve been wondering what it means to march when it so rarely ends in direct political change. Do we do it to make ourselves feel better? In the age of social media, is marching an out of date product of a bygone time? 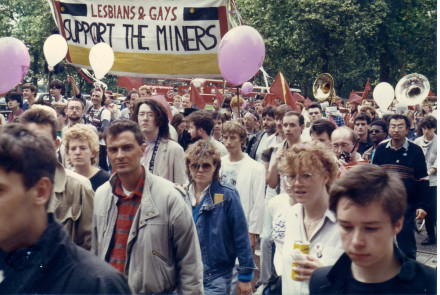 Last night I went to an early screening of new film Pride (which goes on general release on 12th September). A moving, screamingly funny and ultimately triumphant movie based on the true story of Lesbians and Gays Support the Miners (LGSM). Despite early resistance from traditional mining communities and even the NUM, LGSM became one of the biggest fundraising organisations for the miners, their families and their communities. It changed the way the left interacted, bringing together disparate groups with who had in common an enemy and a sense of their shared humanity.The film is heart-wrenching pretty much from the get go – especially if, like me, you’re old enough to remember the strike. I may have only been ten at the time, but we came of political age early in the 80s – I was on those marches and I understood then that the miners struggle was my struggle. That my neighbours and I in Hackney were as despised by the tabloids and the Tories as the miners and the gay men and women who supported them.  Our crime was to be inner city kids going to inner city comps.As I have got older, and politics has become less divisive (unless it seems if you are a Tory backbencher) the old certainties of the 80s look attractive. Distance can do that. But while I would love to see our current politics induce as much passion what I am certain of is that many of the communities we were fighting for in the 80s lost and have paid the price for it ever since. While we now – thankfully and rightfully – have gay marriage and the Equalities Act, we no longer have a mining industry to speak of. And we have vast swathes of the country who have never recovered not just from the death of this industry, but from the cruel way they were told that progress has no compassion and the future had no place for them.After the screening of the film there was a Q & A with several of the actors and the producer. I asked them what one message they believed a film about the politics of our past can and should teach us about the politics of our present and our future. The unanimous answer was “take action”. The protagonists in the film did not simply bemoan their lot or that if their fellow men. Instead they organised, agitated and acted.Th film is bookended by two marches. And by the end of it, I knew I had been wrong about marching. That I wasn’t doing it for me. That it wasn’t an indulgence of my lefty conscience to join in.Pride is a film about finding solidarity in unlikely places and about showing solidarity with unlikely groups. It is a film about the power of empathy – practically, emotionally and spiritually. It is a film that reminds us that if we have nothing else to give, we can give our support. It reminds us that the right may have tried to rid us of our sense of society but we retain it. That there is nothing outdated or bygone about solidarity.

Pride is a lovely film that had me in spellbound tears from the first opening montage and kept me there rapt throughout. But more importantly it is a film that has reminded me that political change can and does come through simple acts as well as complex Parliamentary ones.So on Saturday, I will join the last leg of the People’s March for the NHS with my head held high. I will march not because I want to be indulgent in my indignance, but because I want to show the NHS my warmth, gratitude, solidarity and – yes – pride. Show yours and join us.

Pride is on general release from 12th of September. Details of Saturday’s final march and rally for the NHS can be found here.