So this morning, The Sun attacked Ed Miliband – not for the first time. But the way they did it was pretty pathetic, even by their standards – but making it appear that Ed Miliband had refused to back a charity for war veterans. Here’s how it looked: 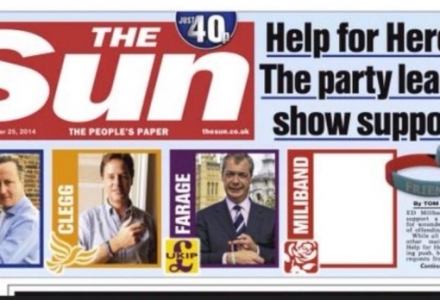 So as Political Scrapbook have noted, that’s The Sun using a registered charity to try and beat up on a politician. That’s a dangerous road to go down, but the story itself doesn’t pass muster. The paper claims that Miliband “refused” to have his photo taken with “Help for Heroes” wristband. Now anyone who knows how politics works even on a basic level knows that press requests for the Labour leader are rarely decided by him directly. In all likelihood he’ll have had no idea that this photo op was even on the cards.

And then there’s the small matter that the times The Sun asked for photos were the day of Miliband’s conference speech, and when he was in a meeting of the Shadow Cabinet to discuss Labour’s respond to airstrikes in Iraq. The Sun appear to have attempted to impose intimidation by deadline. Their expectation is that politicians will dance to their tune, and they’ll attack them if they don’t

Labour figures have largely refused to be drawn on the row, but a spokesperson told us earlier:

“It is untrue that Ed refused to back the Help for Heroes campaign. He was busy with the Shadow Cabinet discussing how to respond to the ISIL threat in Iraq”

Yet perhaps the most revealing thing is that The Sun have launched a front page attack on Miliband using pretty base and unpleasant methods, and it hasn’t gained any significant traction. Whilst it’s too easy to write off the influence of the paper (they are one of Britain’s biggest papers after all), their fudge on Scottish Independence showed that they no longer think they hold the sway they once did. That, perhaps, bodes well for a Labour Party that’s unlikely to get much positive coverage from them in the next year…