It’s been a while since we’ve done the shadow cabinet rankings, so we thought with the minor reshuffle that happened following Jim Murphy’s resignation – and as some, including Mark Ferguson, are calling for Miliband to use his front bench team more – we’d see what LabourList readers thought of each member of the shadow cabinet.

Before we take a look at the results, here’s a quick explanation of how we’ve figured out each shadow cabinet members percentage rating. We asked LabourList readers to say whether they have a positive, negative or neutral view of each member of the Shadow Cabinet. We then subtracted the negative score from the positive score to achieve a final score.

Here are the results:

When we last did this back in July, and as had become the trend prior, Andy Burnham was by far the favourite. Not much has changed. Burnham comes out in the lead with +80.43%, a whole 30 points ahead of his two nearest challengers, Yvette Cooper and Hilary Benn who are are on +50%. Jon Cruddas has moved up from sixth place – overtaking Sadiq Khan, who’s in fifth and Angela Eagle, who’s in sixth – making him a close fourth on +48%.

Since we last did this, Maria Eagle and Rachel Reeves have dropped out of the top 10, as Harriet Harman and Caroline Flint have moved up. With Harman edging into ninth place and Flint into seventh, pushing Chuka Umunna down to tenth (from seventh last time) while Gloria de Piero stays at eight.

We did this poll prior to Emily Thornberry’s resignation last night – she came in towards the lower end of the scale, but still on a positive rating with +20%. 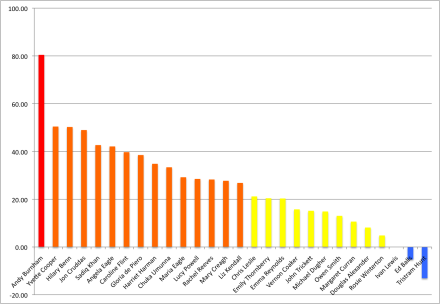 At the other end of the scale are the same three as last time: Ivan Lewis, Ed Balls and Tristram Hunt. However, this time Lewis got a rating of 0%, as opposed to a negative rating, meaning that the same number of people thought reviewed him positively as reviewed him negatively. This means he’s moved up since last time. While Ed Balls came into second-t0-last with -5%. This is perhaps to be expected since as Shadow Chancellor, he’s making decisions (such as committing to freezing public sector pay) that many do not agree with.

846 people voted in our weekly survey this week – thanks to everyone who took part. The Shadow Cabinet rankings will be appearing again in the weeks and months ahead.