Karl McCartney, the Tory MP for Lincoln, has left himself a little red-faced today after his Labour opponent Lucy Rigby highlighted that his recent Twitter favourites included a rather graphic pornographic photo.

McCartney has now deleted all of his favourited tweets, but we still have (heavily censored) screengrab for posterity: 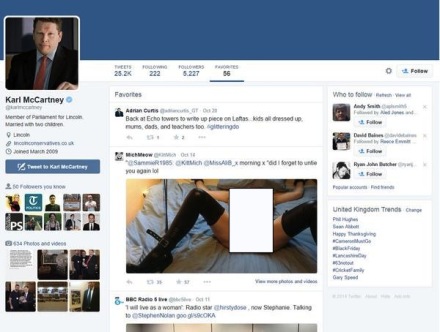 Lincoln changed from Labour to Tory at the last election, and McCartney has a slim majority of 1,058 – it’s number 18 on Labour’s target list. A reliable bellwether, it has gone with the winner of every election since 1974.

It’s not the first time we’ve had to report McCartney’s questionable use of Twitter. In March, it got to the point where Gloria De Piero had to write to David Cameron about his behaviour after the Lincoln MP joked with a colleague comparing Lucy Rigby to a lingerie model.

Looks like Cameron isn’t the only Tory who has a “women problem”.