This is what page 9 of today’s Sun looks like (h/t @DavidWooding): 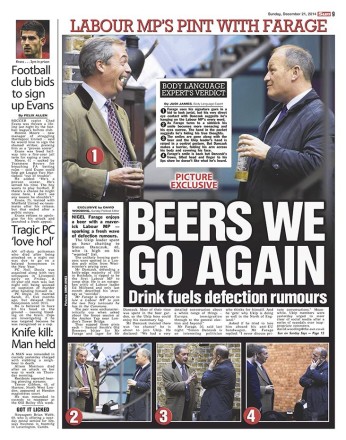 It appears that Rochdale Labour MP Simon Danczuk – no stranger to strident views on Ed Miliband or party policy – met Nigel Farage for a few beers last week. And despite the encounter taking place far from the prying eyes of Westminster, it seems they were entirely coincidentally photographed by The Sun…

Their meeting has obviously raised concerns that Danczuk might defect to UKIP – he’s certainly been the most widely mentioned potential defector in the Labour ranks – and he was on LBC this morning describing Farage as “an interesting guy” and “probably the most successful politician of 2014. A fun guy”.

That said, Danczuk told The Sun that there was “no chance” he would be joining UKIP.