Campaigning with Paul Farrelly MP at Keele University yesterday, I was struck by the energy, passion and commitment of the students. Getting ready to encourage as many of their friends to register to vote on today’s National Voter Registration Day, these students are a real inspiration. It’s people like them, along with those behind the innovative new tech campaigning initiatives, who will help to win this election for Labour. 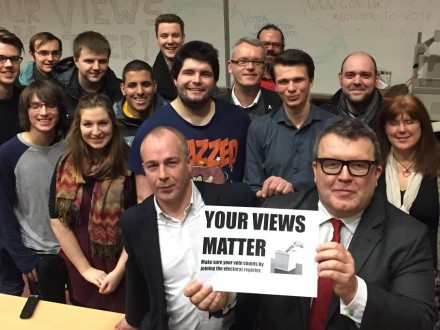 Ed Miliband was right to highlight the scandal of the million voters disappearing from the electoral register. Under the new system introduced by the Tories, universities and colleges are no longer able to block register students living in halls of residences, and that could have a big impact on areas where we need to win. In Newcastle-under-Lyme alone it is estimated that there are approximately 2,500 fewer campus based students as a result of the Tory changes. No wonder the Tories have spent tens of thousands of pounds in Paul’s constituency in recent months. They think they can steal the election because local students will not have their voices heard on polling day.

With only around 12 per cent of young people saying they would definitely vote, in the recent Hansard Political Engagement Audit, it’s crucial that we do all we can to bridge the gap between politics and young people, show that Labour is listening, and inspire young people to get involved

We need to stop talking about ‘young people’ and start talking to them.

Making voter registration easier, and more accessible to young people, is an issue that Chris Ruane MP has been championing for many years and, most recently, as part of the select committee inquiry about voter engagement. His tireless campaigning, exposing the facts and highlighting the weaknesses of the new electoral registration system is commendable. We all need to put more pressure on our local councils to do more to help register young people in schools and during every interaction that people have with their local authorities, as advocated by John Spellar MP.

Campaigning in Harlow, Stoke and Rhyl during the past few days, I’ve heard from a lot of young people who have serious concerns about the state of the nation. With spiraling debt, rising bills and an uncertain jobs market – this generation has a raw deal. And with property prices rising and rents getting out of control young people face an almost impossible economic future. How are young people meant to get by and have hope for the future?

That’s why it’s great that so many activists and Labour MPs are out encouraging people to register to vote on National Voter Registration Day.

It’s also great to see so many new initiatives that are encouraging people to vote, using social media and new technologies. The new @RegistHERtoVote social media campaign encouraging more women to register to vote is a really positive step. And I’m also backing the new voter advice app specifically designed for young people that Bite the Ballot and the think tank Demos are releasing in March.

Tom Watson is the MP for West Bromwich East