The Evening Standard has found that Gavin Barwell, the MP for Croydon Central, has written to his supporters encouraging them to contact friends and relatives to advocate for him.

However, he’s asked them “not to mention David Cameron or the Conservatives” in the letters. He says that it’ll be “much more effective” if they don’t mention either the party or the party leader. 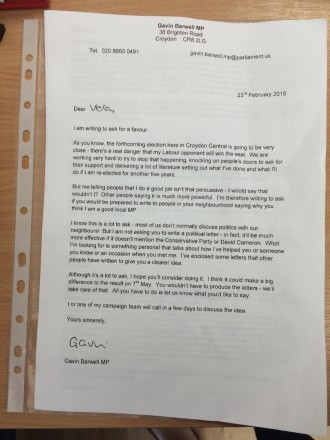 Croydon Central is a marginal seat. Labour’s candidate in the constituency Sarah Jones criticised Barwell for this move and explained that it spoke volumes about the Conservative’s brand:

‘It’s a sign of real desperation that Gavin Barwell is actively telling people not to call him a Tory.  He’s trying to pull the wool over people’s eyes.

‘If people were wondering if the Tory brand had become toxic in Croydon, he’s the proof you need.

‘However hard he tries, he can’t run away from his voting record – voting for deep cuts, privatisation of the NHS, the bedroom tax and trebling tuition fees.”