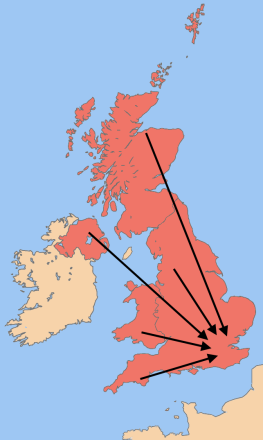 The time has come to give people what they want – power over their own lives and their own communities. The aloof and distant state, making decisions in giant offices in Whitehall can feel – and act – as distantly as the big businesses, utility companies, landlords and transport companies that treat us like numbers on a page rather than individuals with needs and hopes of our own.
Labour stands ready to take on the power challenge. Whilst tackling economic disadvantage must always be at the forefront of Labour’s thinking, it’s increasingly clear ( in part from Labour’s experience of government) that cash transfers are insufficient on their own. That’s where devolution of power comes in, not just from Whitehall to the more accountable local or regional level, but down to communities, villages and towns. Pushing decisions down to a level where it’s impossible to say that politics is too distant or you can’t have a say – and helping to rebuild our politics by redressing the power imbalances in modern society.
Labour wants to devolve in government
But does Labour want to devolve power? The party has spent most of the past few decades furiously centralising in a laudable attempt to raise standards, ensure fair funding and avoid the fearsome post-code lottery. Yet the tide within the party has shifted in recent years away from Whitehall lever-pulling and towards more local decision-making and delivery. The brutal cuts implemented by central government in recent years have created the creative necessity to innovate locally. And Labour councils have shown that they have the wit, the energy and the consent of their communities to offer more rather than less when the purse string are tightened.
That has in turn reignited the spirit of devolution within the Labour Party leadership. The kind of politician who wishes to give power away is a rare one indeed, but the devolvers appear to have the upper hand in the party’s current debates. Both Lucy Powell and Andrew Adonis (who will have big roles to play in both the big-picture and the day-to-day functioning of a future Labour government) spoke of the importance of devolution at the LabourList conference last week. Whilst it is not yet embedded in the DNA of the party, elements of devolution are a part of Labour’s plan for government. A historic “giving away” of power.
Why? Because the people demand it, and because for the first time there are a core of committed devolvers in the Labour ranks.
The people want devolution
Devolving power from Westminster would be fruitless and perverse if the people of Britain didn’t want that power to be seized by their communities. Exclusive polling conducted by Survation for LabourList shows that there is a real disconnect between the centre and the people – between where power is wielded and where that power has an impact. We found that:

And Labour are the party that is most trusted to deliver on this agenda – nearly a third of respondents (31%) believe that the Labour Party is most committed to devolving power to local communities in England, beating the Conservatives into second place on 22%.

Furthermore, the level of devolution that’s currently on offer is far outstripped by what our polling suggests the British people (and particularly the English people) want to see. 43% of respondents think that there should be a similar devolution of powers from the UK government to regions and communities across England as there is in Scotland and Wales (28% do not think that there should be a similar devolution of powers) – a figure that’s broadly stable across regional and political divides. But considering the significant and growing powers that Scotland now weilds, this agenda provides a potent – and less centralised – alternative to the one size fits all of EVEL (which would see more decisions taken in Westminster and Whitehall, not less).
Who are Labour’s key devolvers?

So in the battle for a more devolevd Britain, who are those rare politicians who long to pass on power rather than horde it? Jon Cruddas is perhaps the Labour Party’s Lord High Priest of devolution and passing on power, and there’s likely to be a clear thread running through Labour’s manifesto that reflects his influence. But he is my no means ploughing a lone furrow. MPs now wear their devolving desires on their sleeves as a badge of honour. Unlike in previous decades Whitehall machine isn’t entirely revered in the PLP as something to be tamed and pointed at our communities, but as something to be dismantled and sent to our communities.

A new pamphlet from Compass gives us some pointers as to who some of the leader devolvers are. Steve Reed and Chi Onwurah both feature, as do a panopoly of think tankers, local government thinkers, writers and campaigners. But perhaps the most interesting chapter comes from Liz Kendall and Lisa Nandy – two MPs who are not normally spoken of in the same ideological breath, but whom are united both by an energetic desire to fix our broken politics and to devolve, seeing the two as intertwined. They talk the language of liberty and freedom in a way that suggests the Left might be able to claim that vocabulary from the Right. And when they write…

“For our generation of Labour politicians the New Labour politics of the state is about putting power in the hands of people. It leaves the divisions inside the Westminster bubble far behind. The debate is not between left and right, public or private, Blair vs Brown. Instead, it is about devolving power to our cities, counties and communities, and renewing our public services so that they are accountable to and shaped by the people who use them.”

…I for one believe them. And suspect that devolution – far from being the latest buzzford or pan-flash – is where the party, and the people, are likely to go, as we seek stronger communities to make sense of our fragmented and complex world.

You can see the full tables of Survation’s polling for LabourList on devolution here.