By now most of you have probably seen the incredibly shrill Mail on Sunday front page. If you haven’t – here it is: 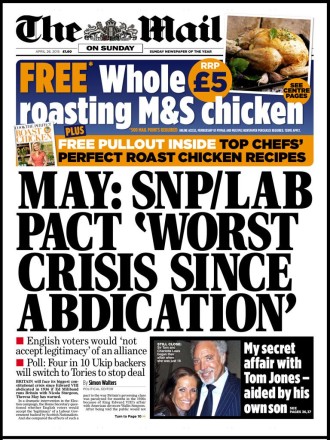 As is often the case, the size of the typeface used in the headline is inversely proportional to how serious the piece is. I’m particularly taken by the ludicrous analogy that Theresa May has chosen – as were all of the people that got #worstcrisissincetheabdication trending on Twitter today. I’m no fan of the Nationalists (indeed, I’ve been banging the “no deal” drum for three months, before Miliband finally used that formulation of words today) – but does the Home Secretary really believe that SNP MPs voting for legislation proposed by a Labour Prime Minister is worse than World War Two? Worse than Suez? If so, it shows a stunning lack of perspective.

But she’s far from the only senior Tory to be hurling green inked missives in today’s papers. Boris Johnson was regurgitating the “back stabber” lines in the Sun (and seemed uncomfortable defending the line when challenged on Marr) whilst Iain Duncan Smith went off the deep end by claiming that Labour hates marriage. Evidently Labour hates marriage so much as a party, Labour MPs voted on mass to extend it to same sex couples.

So much for David Cameron’s “positive campaign” eh?

There are two ways to see these increasingly unhinged and spittle flecked attacks:

a) as the desperate dice throws of a campaign that’s not working out how it’s protagonists planned. Rather than changing tack, the Tories are so invested in a negative strategy that involves demonising and delegitimising Miliband, that when it fails (because rather than being the fool they convinced themselves he was, he’s coming into his own in the campaign) they’ve decided to double down on the strategy instead. It’s all they can do at this stage, and it might well work (or at least form the core of a Tory opposition strategy), but it could also backfire. People are starting to find their “warnings” a bit daft and a bit silly, which risks the whole “Get Ed” gambit unravelling in its entirety.

b) as the opening salvos in a battle for the future of the Tory Party – Cameron has managed (usually through surrender rather than leadership) to keep his backbenchers in line. But if he is forced out of Downing Street in the coming weeks, the future direction of the Tory Party is up for grabs. That’s why IDS was appealing to the basest instincts of his social conservative base in the Telegraph today. That’s why Boris Johnson was attacking Andrew Marr as a BBC leftie this morning. And as for Theresa May – well the only abdication that she cares about is David Cameron’s. She needs to be at the forefront of the attacks on Labour to win over the Tory grassroots. So does Boris. Especially as a phalanx of other putative Tory candidates have started to mass behind the scenes.

The Sunday Times reports today that potential candidates for Tory leader include Andrea Leadsom (charismatic but largely unknown Europe obsessive), Dominic Raab (unpopular, unknown and from the very fringe of the Tory fringe) and Nicky Morgan (key selling point? Not Michael Gove – that she’s a potential candidate is a sign of how thin the ranks of serious Tory modernisers are). Any of these lightweights would be an absolute godsend to a minority Labour administration – but don’t assume the Tory Party won’t make such a daft decision. They chose Hague, IDS and Howard before stumbling upon Cameron, lest we forget.

The truth is probably between these two poles. The Tory attacks are getting more desperate and aggressive (and will continue in a similar vein) because it is all that Crosby and co know how to do. But in such a fraught environment, the jockeying for leadership positions will begin. Today we saw some overt examples of that, and if Cameron isn’t careful, that’ll continue in a similar vein too…