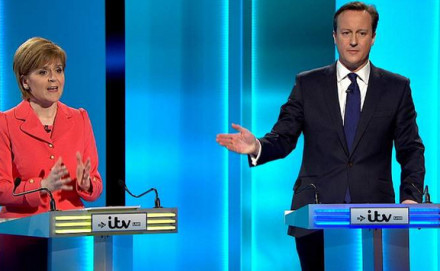 Since the general election commenced in earnest, I have been following it on an almost hourly basis for Class (Shameless plug! Check out our election coverage here). It’s been a bizarre few weeks that has, at times, spilled over into the kind of nightmare that would please Jean Baudrillard; the critical theorist who argued that the primary product of post-modern societies is not goods, but simulations of real human experience.

Indeed, from the prominence of mysterious Wikipedia edits, excruciatingly staged media appearances, and eerily personable email circulars, it almost feels as though the politicians out there in the real world are simply actors hired to lend a smidge of credibility to the absurd dramas playing out on our screens. This theory reached its crescendo yesterday when political hacks began to suspect a grown man was posing as a 13 year old girl on Twitter in order to convince the Westminster press that David Cameron had amassed a group of teenage fans. As John Lanchester mused recently, “It’s almost as if, to adapt Jean Baudrillard, the general election is not taking place.” 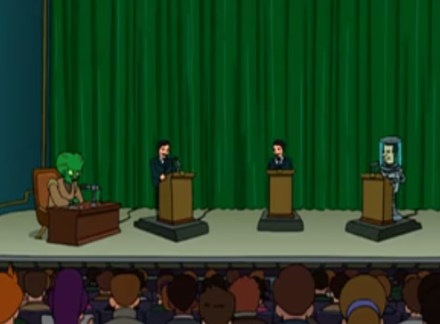 In other ways, this election reminds me of the episode of Futurama where politics has reached such a nadir of inauthenticity that the presidency becomes contested by two identical clones.The clones are eventually rejected by the electorate who, desperate for something genuine, end up voting in a giant marauding robot Richard Nixon. If we were to take that analogy to the point at which it inevitably breaks down, I suppose you could say the robot Richard Nixon of Election 2015 is Nicola Sturgeon. Tired of Westminster-centric business-as-usual, Scottish voters have flocked to something that seems like a sincere alternative, which is now being portrayed as a destructive interloper.

And here’s the other strange fantasy of Election 2015: faced with the prospect of no party winning a majority, David Cameron and Ed Miliband have been forced to pretend they exist in a universe devoid of opinion polls and continue to insist they can both win the election outright. Perhaps the most sensible choice voters could make is not to elect a prime minister whose grasp on reality is ostensibly so tenuous.

I jest, of course: both leaders do know the score. And the truth is, the Tories probably realise the most likely outcome is that Ed Miliband will be Britain’s next Prime Minister. To that end, the biggest mistake Labour is currently making to interpret the right-wing hysterical warnings about an SNP agreement as nothing more than a craven attempt to scare people into voting for Tory. Don’t get me wrong, it definitely is; but the Tories are also positioning themselves for opposition.

By recoiling from the SNP every time a Labour-SNP agreement is mentioned, Labour is falling into a Tory trap of making its own future government illegitimate by insisting such an alliance is unthinkable. Imagine what will happen every time Labour passes a piece of legislation that has the support of the SNP: no matter how good it is, the Tories and the right-wing press will seize upon it as the bastard product of a Frankenstein’s monster government. Much like the behaviour of the Republicans in the US under Obama (another leader who has been viewed as an interloper by the assumed ruling class), the Tories will spend the next five years digging their heels in and making it impossible for a Labour-SNP alliance to govern.

In this scenario, Labour might – as it has done so many times in the past – cling onto the hope that reality will beat the story in the media. But in this post-modern world, the story can often be more real than reality itself. Baudrillard was onto something in that respect; and if Labour’s MPs don’t start planning now, they might find that the only thing being beaten is them.