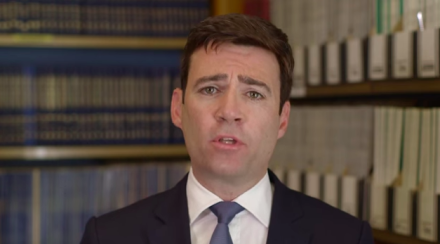 Andy Burnham, one of the four people in the running to be the next Labour leader, is the first candidate to reveal that he’s gone over the 35 endorsement mark.
In order to make it on to the ballot, a candidate must get the support of 35 MPs or more.
Burnham has now passed this number, as today he’s announcing he has another eight MPs to add to his list of supporters. These eight are all from the 2015 intake and Burnham is arguing that they show the diversity of support he has received.  The full list of these new MPs reads as follows:
Angela Rayner, MP for Ashton, Droylsden & Failsworth
Peter Dowd, MP for Bootle
Justin Madders, MP for Ellesmere Port and Neston
Nick Thomas-Symonds, MP for Torfaen
Harry Harpham, MP for Sheffield Brightside and Hillsborough
Rachael Maskell, MP for York Central
Louise Haigh, MP for Sheffield Heeley
Rebecca Long-Bailey, MP for Salford and EcclesThis is in addition to two other MPs from the 2015 who announced they’d be supporting Burnham earlier in the week: Anna Turley (MP for Redcar) and Conor McGinn (MP for St Helens North).
Alongside this, in what might be seen as a response to Yvette Cooper – who today said she won’t swallow the Tory manifesto – Burnham has also outlined why he’s running:
“We need to go straight to the difficult issues as to why Labour lost the election. I’m not just running a leadership campaign, I’m building a campaign for Labour to win in 2020. If we’re going to do that we’re going to have to face head on those difficult issues around spending, immigration, benefits and our relationship with business.
“Don’t copy the Tories, we need to develop Labour answers in those areas. We’ve got the looming European referendum, it’s time for Labour to get off the back foot on immigration and challenge David Cameron to develop a package that the British public can support, where people are free to work but not free to claim.”