At the moment a lot of Labour news is focussed on the leadership and deputy leadership contests. But in London, there’s another race going on.

The applications to be London’s mayoral candidate closed on Wednesday (we’ll be publishing the full list of all who applied shortly) but we asked our readers which of the declared candidates they wanted be Labour’s candidate. And this time, as with the leader and deputy leader candidates, we gave readers the option to suggest an entirely different candidate as well.

Tessa Jowell has come out ahead of the rest of the pack, with 30.9% of the vote. But not far behind her is Sadiq Khan, former Shadow London Minister, who got 28.8%. The gap between these two has closed and suggests Khan is potentially making some headway.

Gareth Thomas, MP for Harrow West, comes in last. He received 2.4% of the vote but this could be down to the fact that’s not as well known as the other candidates. 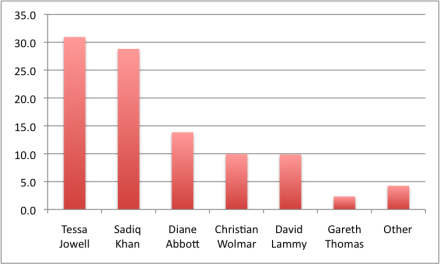 And in the ‘other’ category there were quite a lot of recognisable names – although no one person got a large umber of votes.

Eddie Izzard, comedian and Labour supporter, got 9 votes, while in second is former London Mayor Ken Livingstone – 6 people want him to be Labour’s candidate. In third is Baroness Doreen Lawrence, the tireless campaigner whose son Stephen was murdered in a racist attack in 1993 got 5 votes. Joining Lawrence in this number three spot is Chuka Umunna, MP for Stretham, who last week stood down as a leadership candidate.

2,274 voted in this week’s survey. Thank you to everyone who took part.

We also wanted to note that for all of our surveys, we are vigilant about monitoring responses and removing any suspicious votes.