Uma Kumaran is the Labour PPC for Harrow East, she’s running a closely fought campaign against Tory Bob Blackman, but recently, these leaflets have been going out in the constituency, targeting her and the (in a poor third place) Lib Dem candidate over their party’s views on laws to outlaw caste discrimination. The leaflet goes on to back Blackman: 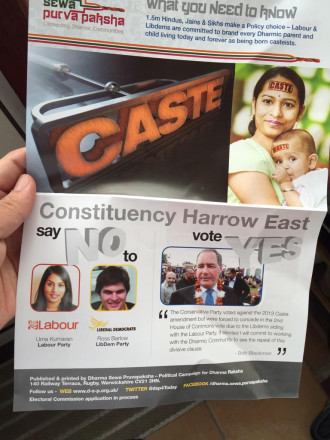 This appears to be the DSP’s Facebook Group, which has also published a copy of the leaflet.

Kumaran has responded to the leaflet, saying:

“I am sad that such a deeply divisive leaflet has gone out. I am standing for the whole of Harrow East: a united and diverse community. On a personal level, as a Hindu, I am appalled that my faith is being used against me. Stop, this is gutter politics. I don’t know who is behind this leaflet but it condemns me and recommends people vote for Bob Blackman and people can draw their own conclusions.”