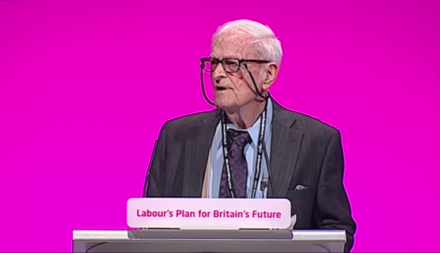 Over my long life I have been many things: As a lad I was a child labourer who lived in cheap doss houses with my parents who had been made destitute by the Great Depression. As a young man, I left those warrens and took the kings shilling and served in the RAF during the Second World War. In peace time, because a Labour government introduced the Welfare State, I became a member of the middle class and exchanged my workers cap for a manager’s suit.

No matter how far I travelled from the slums of my youth I have never forgot that it was the social safety network created by Labour governments which allowed my generation and the baby boomers to progress both socially and economically in our personal lives.

I have been a son, a brother, a friend, a husband, a father, widower and a pensioner. So, at 92 during this last general election after a life time of experiences, I took to the road to speak on the campaign trail to people about how 21st century Britain needs an economy that benefits all its citizens not just the hedge fund managers.

Over the course of this election I travelled across our country to over 50 towns, cities and villages. I spoke at riding associations, market stalls, universities, pubs, and community centers to people from all walks of life. However, I did more than speak during this election I had conversations with real people, and I listened to what they had to say about their lives and their communities.

Not one person I spoke with, during the election, thought Labour was being led astray by trade unions or that they had a negative influence on its policies. The concerns of those diverse but ordinary Labour supporters were about the real threats Britain’s economy and society faces from unbridled corporations’ intent on earning profit for their shareholders but refusing to contribute to the upkeep of British society by paying fair taxation to the Treasury.

I find it horribly disappointing that after our defeat on May 7th to the conservatives in England and our defeat to the SNP in Scotland that some in the party believe Labour can only return to power if we first emulate the Tories and swing our policies to the right of centre and secondly cut our relationship with trade unions.

Most ordinary Labour supporters are like me and believe that trade unions are necessary to maintain a just and a civilised society. Unfortunately there are small but strong faction in the Labour party who would prefer to replace the advice, the experience the knowledge of millions of trade union workers along with their financial contributions with a nebulous concept called aspirational politics.

I am not convinced that a buzz word used by policy wonks and motivational speakers to package envy and sell it as a party platform can rebuild Labour’s image with the voting public or make us worthy of governing Britain in 2020.

Some may think that because I am 92, I am a relic from another era, another Labour party. Maybe, to those who don’t believe in social justice, don’t believe that our economy must be fair and balanced and not a feral bull market that spreads wealth to the few on the sweat of the many, I am.

But all those people on campaign trail I broke bread with didn’t think I was behind the times because they also shared my belief that the next Labour government must be a government for and by the people, not a rubber stamp for the corporations and the 1%. Labour can only accomplish that if it remains and ally to the trade unions.