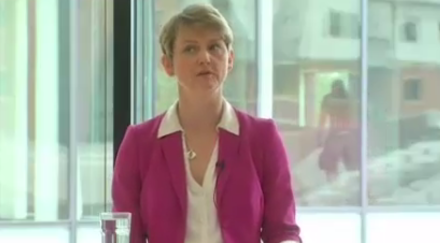 Yvette Cooper today accused Jeremy Corbyn of peddling “old solutions to old problems” and seeking to hand more power to “white middle aged men in Whitehall” rather than empowering ordinary people to transform their own lives.

Speaking in Manchester, Cooper said she was part of the Labour Party’s “radical equality tradition … drawn from the emancipation and liberation movements.” She followed her speech by promising to offer working families with 3 and 4-year-old children 30 hours of free childcare if she is elected Labour leader. This would be paid for by cancelling the government’s £3 billion tax break for married couples, which will not benefit four out of five families with children.

Cooper’s speech marks a change in the leadership election, in which the candidates have shied away from criticising each other’s policies.  Today she said she felt compelled to speak out against Corbyn even if it cost her votes. “Our party, the values we stand for, and the country we want to fight for are too important not to be honest about what is at stake,” she said.

Cooper attacked Corbyn’s plans to nationalised the big six energy suppliers and switch “control of some power stations from a group of white middle ages men in an energy company to a group of white middle aged men in Whitehall.” She argued the more radical approach would be to spend the money extending Sure Start; “giving mothers the power and confidence to transform their own lives and transform their children’s lives for years to come.”

She also argued that it was not “radical” to support leaving NATO or consider leaving the EU:

“And at a time when we are dealing with a global climate change threat, when international borders have ebbed, when extremism doesn’t recognise nations, and when we need to work together more than ever, is it really radical to quit NATO, to prevaricate over membership of the EU, or trash our reputation as an internationalist party?

We should stay in the EU, stay in the European Court of Human Rights, stay in NATO – sorry, Jeremy, internationalism is a core Labour principle and I will always fight for it.”

The Shadow Home Secretary accuses Corbyn of “really bad economics”, and says his Quantitative Easing for the People (QEP) policies will make it harder to “get the sustainable growth” the economy needs for long-term investment.

“Quantitative easing to pay for infrastructure now that the economy is growing is really bad economics.

Quantitative easing was a special measure when the economy collapsed, liquidity dried up, interest rates fell as low as they could go.

But printing money year after year to pay for things you can’t afford doesn’t work – and no good Keynesian would ever call for it.

History shows it hits your currency, hits investment, pushes up inflation, and makes it harder not easier to get the sustainable growth in a global economy we need to tackle poverty and support our public services.”

The speech also saw an attack on the idea that a Corbyn leadership would be taking Labour back to its roots, as some of his supporters claim. She argued that the party was set up as a “broad alliance” for a reason – because a wide range of traditions and groups could not win enough support singularly to pass legislation. Cooper said”

“When we were founded back in 1900 the whole idea was to be an alliance of workers and intellectuals, of Fabians and socialists, of women and men, of trades unionists and Christian socialists, of radicals and moderates. We even did a deal with the liberals.

And there was good reason for that broad alliance. Because people were sick of losing battles in Parliament and in the courts and they wanted to change the world.

I don’t believe that Jeremy can hold the party together – and I can’t bear to see us pulled apart when I believe Britain needs a Labour party more than ever.”