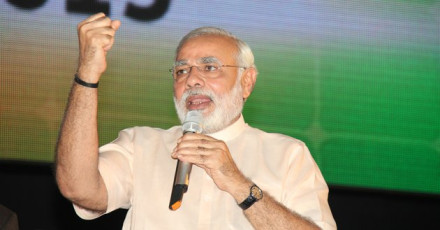 The preparations are already underway for Indian Prime Minister Narendra Modi’s arrival to British shores in November. For his first unofficial visit, Wembley has been booked out for a Diwali event in his honour, his face has been printed on the side of a bus that will shuttle people to and from the venue and three Labour MPs – Keith Vaz, Virendra Sharma and Steve Pound – have decided to donate their salary rises, which kick in next month, to the festivities.

Vaz has gone one step further.  He’s so “excited” about the impending visit, he’s asked for India’s PM to be allowed to speak in Parliament and for the two universities in his constituency – Leicester University and De Montfort University – to give Modi an honorary degree.

This decision to lavish praise on Modi might seem like a sensible move; an effort to patch over old colonial wounds never properly acknowledged by the British. But to look at in this light ignores what’s been going on in Modi’s India since he came to power last May.

Modi leads the Bharatiya Janata Party (BJP), a right wing Hindu nationalist party whose values are inherently opposed to the Labour party’s. One of the BJP’s hallmark policies has been attacking workers’ rights by merging India’s 44 labour laws into 4 and prompting one of the biggest labour protests in India’s history last month. Under his watch, minorities are attacked in India with few repercussions; earlier this month a Muslim man was lynched amid suspicions that he’d eaten beef.

This is just the tip of the iceberg. Modi cut his political teeth in the Rashtriya Swayamsevak Sangh (RSS), a movement connected to the BJP, which finds its roots in Nazism and Fascism. He was Chief Minister of Gujarat, a state in the northwest of India, when over 2,000 Muslims were killed in the 2002 massacres – though he wasn’t found guilty of involvement many people still believe he played a part. Meanwhile, under his stewardship, Gujarat was subjected to an aggressive neoliberalism – which gave birth to the Gujarat Model – that was thought to increase inequality. Modi’s pro-business politics don’t care too much for the poorest in Indian society.

Discontent with Modi’s leadership isn’t hard to find; just last week 41 writers returned literary prizes given to them by India’s prestigious literary academy in protest of the growing number of incidents of communal violence and attacks on intellectuals in the past year.

The Labour MPs who keen to show their support for Modi are on the wrong side of the argument. Diplomatic ties are important but there’s a huge difference between engaging with Modi, the elected PM of the world’s largest democracy, and brushing aside the arsenal of evidence proving he’s a staunch right winger, intent on marginalising minorities, to fawn over him. This is the choice the four Labour MPs are making; it’s one they should reconsider.

When Modi makes his trip to London his brand of aggressive, nationalistic, anti-worker, anti-minority politics has to be questioned.  Business – not human rights – will be on the agenda, and it’s up to Labour to challenge, not accept this.

Update: This article was amended on 23rd October 2015 after we received the following statement from Seema Malhotra MP:

“I understand a few MPs have committed to donating their November salary to aspects of Prime Minister Modi’s visit. I was not present at the event where this was announced and my name has been included in error.  The first I was aware was when I read it on Twitter, as I have already committed my salary increase to supporting an apprenticeship in the constituency this year.”