David Cameron will lay out the Government’s plans for airstrikes against ISIS in Syria on Thursday, with the intention of a Commons vote next week, he announced today. He said he wanted MPs to have the opportunity to consider the plans before voting on them, meaning that Labour will likely come to an official position at the Shadow Cabinet meeting next Tuesday morning.

During this afternoon statement on the Defence Review, Cameron also said that the debate on Trident renewal next year would be followed by a vote “at the appropriate moment” – sparking speculation that it will be scheduled for a time that would cause most damage for Labour.

Responding to the Prime Minister’s statement in the Commons, Jeremy Corbyn attacked Cameron over police cuts, saying that “the public will not understand or accept any cuts to frontline policing”.

He also accused Cameron of breaching “the spirit of the Armed Forces Covenant”, which recognises the moral obligation to look after members of the armed forces, with the planned cuts to tax credits.

With the vote on Syria not expected until late next week, MPs will probably use next Monday’s meeting of the Parliamentary Labour Party to make their views known, before a party line is settled on Tuesday. Some backbenchers are understood to be planning to push for a free vote this week. 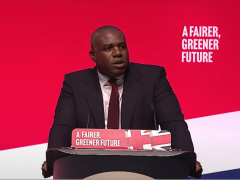