Writing in the Telegraph last month John McTernan picked up an idea which had earlier been floated by Sam Coates in the Times. It offered to those who would like to see the back of Corbyn the tantalising prospect of being able to oust him without reference to the members, affiliated supporters and registered supporters who put him in.

It’s ugly – no doubt – but, say its proponents, Corbyn’s leadership threatens the very existence of the Labour Party. And, in such moments, anything which improves the prospects of the Party’s survival is not only justified but necessary.

Today’s Independent splashes with a report claiming that Corbyn’s team are looking to revise the rules concerning leadership contests, clearing up some ambiguities – issues also discussed on the Sunday Politics this weekend.

But are rule changes necessary?

Here are the relevant bits of Rule 4 (click to enlarge): 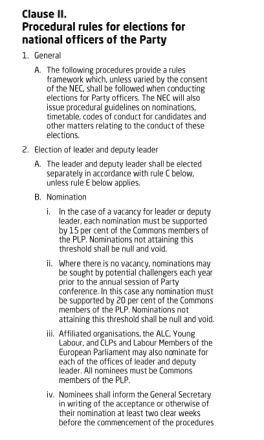 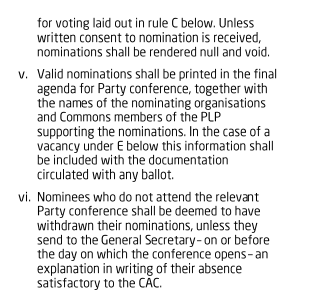 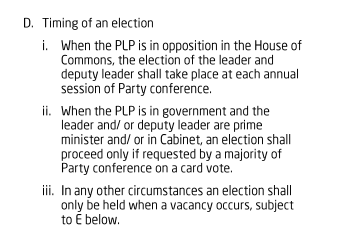 So the argument is that when the PLP is in opposition there must be an annual election of a leader (see 2.D.i.); where there is no vacancy (because there already is a leader), nominations must be supported by 20% of the PLP (2.B.ii); and once there is a valid nomination an election is triggered and everyone (including the leader) would need the consent of the PLP to get on the ballot.

Now I profoundly believe that Corbyn’s road is not the road to Government; and I no less profoundly believe that it is the role of the Opposition to seek to be in Government. I make these points only by way of explaining that such bias as I have is against Corbyn continuing as leader. But it is tolerably clear – not perfectly but tolerably clear – to me that he can’t be seen off by this mechanic.

What’s the starting point to understanding why?

The proponents are contemplating a world in which Corbyn has no wish to stand down; in other words, we already have a leader. So it’s Rule 2.B.ii that applies: where there is no vacancy, nominations can be sought by “potential challengers” who must obtain the support of 20% of the PLP.

But the rule explicitly provides where there is no vacancy that it is only “potential challengers” who must pass this threshold. There is no provision requiring the existing leader to pass this – or indeed any other – threshold. Sam Coates in The Times suggested that Corbyn might have to pass the 15% threshold in Rule 2.B.i. But that Rule only applies where we have a vacancy for leader. And in the world we’re contemplating, we don’t. Moreover, the common-sense implication of a rule that requires potential challengers to seek the consent of the PLP to get on the ticket is that the leader doesn’t need to. If he – because sadly it seems always to be a “he” – needed the consent of the PLP you would expect the rules to say that.

Let’s call this the Express Argument.

The proponents’ best argument that Corbyn can be seen off through a mechanic exclusively at PLP level arises out of Rule 2.B.iv.

So there is something of a tension between the Implied Argument and the Express Argument.

Now, generally speaking you’d question your inference where there was an express rule to the contrary – after all you’re more likely wrongly to have inferred something from a reading of rules than for the draftsman of those rules wrongly to have expressed them.

But there are a couple of other pointers to this conclusion too.

First, there is no provision for an existing leader to be validly nominated. If the Implied Argument was right, Corbyn would need to pass some threshold. But what? The rules don’t stipulate one.  One might conclude that the reason why the rules don’t stipulate one is because there isn’t and there isn’t one because an existing leader doesn’t need to pass a threshold.

Second, it’s pretty clear that the rules use the word nominee and nominate rather loosely. For example, Rule 2.B.iii says that the ALC, Young Labour, CLPs and so on “may also” nominate for each of the offices of leader and deputy leader. But it can’t possibly be right that a nomination under Rule 2.B.iii is an alternative to a nomination under i or ii and privileged in terms of getting on the ticket without the support of the PLP. But that’s what (read literally) that rule seems to suggest. Rule 2.C (not reproduced above) also uses the word “nominee” interchangeably with “candidate” (compare, for example, 2.C.ix with x). Once you accept that the rules use the words “nominate” and “nominee” loosely it becomes difficult to imply anything concrete from the use of the word “Nominees” at rule 2.B.iv.

As I mentioned above, there is also a further argument advanced by proponents. It’s based on 2.D.i which says that, when the PLP is in opposition, the election of the leader “shall” take place at each annual session of Party conference. And that an election needs nominated candidates. But Rule D seems to me to be predicated on an election having already been triggered by the operation of Rule 2.B. No election? No operation of Rule 2.D.

And you can test whether Rule 2.D really applies as the proponents suggest by asking what happens if there are no challengers. Does the leader really still have to seek the nomination of members of the PLP? Under what rule? And what happens if he doesn’t get that nomination? Is the Party left leaderless? And if the rules contemplate that the Party might be left leaderless through this reasonably predictable sequence of events, why do the Rules not provide for what then is to happen? After all, they provide for what is to happen if the Party leader becomes “permanently unavailable” (see Rule 2.E.iv).

So, in summary, the Rules are plainly not perfectly drafted. But Courts are well used to taking a muscular approach to the interpretation of poorly drafted Rules. And I don’t harbour much doubt about where they’d end up here.